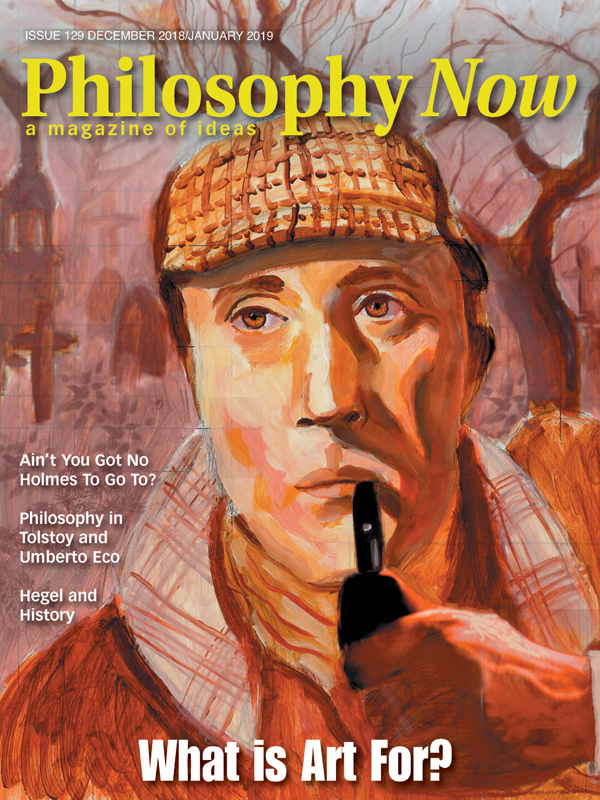 The Functions of Art

A Forgiving Reason: The Secret of Sherlock Holmes’ Success

Tim Weldon detects links between Sherlock Holmes and Blaise Pascal in the operation of intuition.

Carol Nicholson looks at philosophical themes in The Name Of The Rose. (WARNING: CONTAINS PLOT SPOILERS.)

The Case Against Conceptual Art

Trevor Pateman makes the case for the prosecution.

Francis Akpata explains how Schiller saw art as a path to utopia.

Should We Pursue Happiness?

Vincent Kavaloski reviews both Tolstoy’s insights and his oversight.

The Ethics of Education in the Secular State

Andrew Copson considers some ethical problems for secular education in a pluralistic world.

The Trouble with Hegel

Chris Christensen thinks Hegel shouldn’t have stopped where he did.

John Shand doubts there is a moral difference.

Philosophy: A Call to Action

Calvin H. Warner asks if philosophy can improve our lives.

At least Gray Kochhar-Lindgren can be philosophical about it.

Dylan Daniel looks at the philosophical insights of a remarkable scientist.

Carol Nicholson on a remarkable ethicist and Philosophy Now contributor.

Peter Adamson on battles over the trivium and quadrivium.

Raymond Tallis uses all three to show that he has all three.

From Bacteria to Bach and Back by Daniel Dennett

We delve into the brain to look for the mind this issue as Peter Stone agrees with Daniel Dennett that we don’t know our own minds (or brains).

The Light From Our Eyes

Stephen Brewer wonders what’s in the (mind’s) eye of the beholder.