The Sum of My Parts

Imagine that in the distant future, while working on a recalcitrant 3D printer, you accidentally cut off your hand. For a moment you consider printing a mechanical replacement, but you are nostalgic about biology, so you rush with your severed limb to the hospital, where you hope a talented surgeon can sew it back on.

Alas, the damage is too great. But the good news is that they can keep it alive, suspended in a nutrient-filled medium, until technology can be developed which can return the hand to its rightful place. You take it home as a handsome exhibit for your friends, next to your half a Damien Hirst sheep. Just keep it healthy by popping in a few nutrient pellets every day.

All this may sound fanciful, but perhaps we should not dismiss the idea out of hand. Next, suppose that this is not the only accident. Let’s imagine you lose an arm. Again it is saved; but this time, after being discharged from Accident & Emergency, you rush to consult your lawyer: If I die, does the arm inherit anything? The house? And what about my wife? Were we to divorce, would she still be married to the arm?

The attorney tries to allay your fears, but you can see he is worried. He doesn’t know the answers either. You leave, deep in thought. As far as the law is concerned, you are still considered you – house, spouse and all – but how far does the long arm of the law stretch? And how much of you must be in one piece to still be considered you? 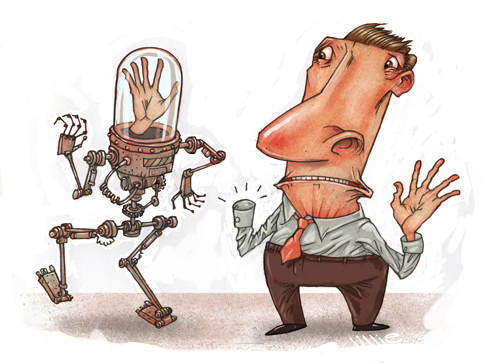 May I Introduce To You, The One & Only John Locke?

The empiricist philosopher John Locke (1632-1704) didn’t ask that question directly, but it could be argued that his theory of personal identity has important implications for how we reflect on this sort of problem in the future. Locke’s conception is an ingenious concoction of Cartesian dualism and empiricism.

What makes you the same person as the bright young thing who went skipping through the doors of your first school so many years ago? You look very different now, and think differently too. In what sense are you still the same you? In An Essay Concerning Human Understanding, Book 2 (2nd ed, 1694), Locke first notes that we have a basis for saying that someone continues to exists if their body persists continuously through time. This common-sense idea is allied to the conservation of matter. Then Locke defines some further essential criteria for personal identity. He argues firstly that somebody is the same person even if his or her body changes over time, provided they have an ongoing pattern of biological functions – so accounting for biological processes such as aging. Next, memory and the continuity of consciousness through time. He says, “as far as… consciousness can be extended backwards to any past action or thought, so far reaches the identity of that person; it is the same self now it was then; and it is by the same self with this present one that now reflects on it, that that action was done.” Thus he implies that personal identity is unchanging over time as long as memory acts as a kind of glue that connects past and present selves.

This notion directs us immediately to questions of moral and legal responsibility. Locke claims that it would be wrong to punish a present self for the actions of a past self to whom it was not consciously linked by a chain of memories.

It seems clear that Locke would not give any body-part, such as a finger, legal responsibility. It does not pass the consciousness and memory criteria for continued personal identity. Moreover, after you part company with your finger, a whole consciousness must belong to one part or the other; either to your finger or to the rest of your body:

“In this personal identity is founded all the right and justice of reward and punishment; happiness and misery being that for which every one is concerned for himself, and not mattering what becomes of any substance, not joined to, or affected with that consciousness. For… if the consciousness went along with the little finger when it was cut off, that would be the same self which was concerned for the whole body yesterday… Though, if the same body should still live, and immediately from the separation of the little finger have its own peculiar consciousness, whereof the little finger knew nothing, it would not at all be concerned for it, as a part of itself, or could own any of its actions, or have any of them imputed to him.”

This narrow sense of identity in terms of indivisibility (‘individual’ is derived from the Latin ‘in’ = ‘not’ and ‘dividus’ = ‘divisible’) is implicit in Locke. Whatever is you must be incapable of fission into a fraction of you, then; and this must be consciousness, since the other two features – body and memory – are both changeable and divisible.

The unitary nature of identity is often overlooked, but it has implications. You cannot have half a human right, and you cannot be half free, because these conditions correspond to the whole you, the consciousness, who cannot be a fraction of you. When someone loses their finger we don’t proportionally dock their voting rights.

It turns out that it will be an unlucky year for you. You should never have bought that 3D printer. Caught in a nasty explosion while trying to replace a cartridge using your one remaining arm, you lose both your legs and most of your viscera.

Not to worry. The medical services have been keeping an eye on you recently, and your organs are safe, marinating in aqua vita, while your brain remains intact within an array of robotic extensions. But we are now approaching a threshold where I have to ask, are you you anymore?

This is the very question psychiatrists and doctors are sometimes compelled to ask, usually without finding a straightforward answer. As far as philosophers are concerned, we may be drilling down to a reduced version of you who is nevertheless still you – still having all your memories and experiences, and keeping your metaphoric hands on the tiller.

René Descartes, for example, considered the pineal gland the place where mind and brain are connected, and hence, in a way, the seat of the soul. If so, it would be your pineal gland running the show if things came to the robotic almost worst. The reality of the mind-brain relationship is somewhat different, though, as we now know. Global Workspace Theory, originally proposed by the neuroscientist Bernard Baars, is an appealing idea. It conceives of brain and mind functions as being composed around a common workspace, similar to working memory in that some content is temporarily held in consciousness to be ‘worked’ upon. Content which makes it into this metaphorical theatre of the mind is broadcast across the brain, making it available to both conscious and unconscious processes.

Wherever we think the theatre of consciousness is located (if we happen to believe in such a thing), deciding when the lights are off and the curtains are down is liable to be somewhat arbitrary. It is here that the issue of personal identity gives rise to complex practical problems. For example, anyone having to decide whether to turn off life-support may also have to decide who, if anyone, is currently having their life supported.

All of our body and parts of the brain might be considered a collection of potential cast-offs. But if we find out that Locke is wrong about identity functioning through consciousness, how we deal with them would be very different. Without Locke’s criteria for personal identity through consciousness, we might want to consider the rights of cells taken from our body, such as blood or cancer cells. Currently, the cells that comprise a foetus extracted from the womb after nine months of gestation are accorded rights even before birth; but change the definition of a person, and an earlier stage of the foetus may be due rights. And if we are convinced of the Lockean notion of identity and we keep chopping away at a brain, we must know when consciousness is eliminated, at which point we are compelled to remove all rights and responsibilities. The problem is that consciousness is indivisible but the brain is not. Locke wedded Descartes’ immaterial mind to a thoroughgoing hard-headedness when it came to the body. But if we keep losing parts of the brain we might be forced to re-examine these notions of consciousness.

Even worse, if you are a thoroughgoing materialist, science has removed you from consideration. Such materialists claim there is no you in charge of anything, only a brain. Or you might call it the epiphenomenal self, the ghost in the machine, or the illusion of ego. On this basis, in the future, should a consensus exist that pseudo-consciousness is only ever due pseudo-rights and can only exercise pseudo-moral responsibility, a doctor’s decision when to terminate a life should not trouble the law or the medical professions because there is no actual self to eliminate nor any responsibility on their part when they do so. The laws that ethical committees decide to enact may then be called pseudo-laws, and we may call the argument for enacting these laws a pseudo-argument.

Brett Wilson is the author of the hard science fiction novel The Tears of God (2011). He lives in Manchester.

A Question of Identity

The Man Whose Face Disappeared

Who Or What Am I?