Although neither of them actually lived in it, Marx and Nietzsche were among the most important thinkers for the Twentieth Century. Their influence on its minds and events was profound as they radically transformed the way we think about the individual, society, and the human condition. In The Will to Power (1901), Nietzsche asserts that all human behavior and reasoning is a manifestation of the ‘will to power’. Marx, on the other hand, argued that social systems are fundamentally characterized by class conflict, in which the ruling class control the means of production through the exploitation of the other classes (for example, Das Kapital, 1867). So let’s look at the views of Marx and Nietzsche in regard to religion and the origins of Christian morality, and Western philosophy, examining the similarities and differences in their thinking in these areas.

The Will to Power, Class Conflict and Religion

In The Gay Science (1882), Nietzsche contemplates the diminishing influence of Christianity across European society. He writes with poetical hyperbole, “God is Dead. God remains dead. And we have killed him.” Although God evidently remains alive in today’s world, with billions of people still belonging to some form of organized religion, what Nietzsche meant was that modern rationalism had removed God from the contemporary Western understanding of the universe, replacing religion with the ‘cult’ of science. But while Nietzsche’s proclamation of the death of God is often characterized as the beginning of nihilism, Nietzsche explicitly opposed nihilism on the grounds that it weakens one’s passion for life. He writes, “What does nihilism mean? – that the supreme values devalue themselves” (Sämtliche Werke: Kritische Studienausgabe, vol. 2, p.319). So Nietzsche recognized the diminishing role of religion across European society, but also the need for a non-Christian system of values by which mankind can live meaningfully and embrace the drama of existence.

A key aspect of Nietzsche’s response here is the concept of the will to power. Very broadly, this is the notion that every organism strives to achieve mastery in life, continually growing rather than merely surviving. For Nietzsche, the will to power is the impulse guiding all forms of human reasoning and behavior, too. In Beyond Good and Evil (1886), he explains how even philosophers are unconsciously guided by their ambitions, drives, personal values, and environment. He writes with candid cynicism that instead of seeking knowledge, “The scholar’s real ‘interests’ generally lie in quite another direction, perhaps in his family or in making money or in politics.”

Nietzsche’s analysis can also provide us with a valuable insight into the relationship between religion and power, as well as into some of the psychological reasons for why people engage in religious practice. Religion can provide us with a feeling of control in a chaotic life, reduce our sense of powerlessness in the face of suffering by giving that suffering a meaning, and help us exert power over others. One only need consider the financial status of super-wealthy Christian pastors or the power of bishops in the Middle Ages to recognize how even religion can work to maximize an individual’s prosperity.

Marx also saw religion as a manifestation of power. However, his conception of power is very different from Nietzsche’s. In Das Kapital, Marx argues that in Western society organized religion is an instrument of the capitalist elite to keep the masses in economic subservience; or as he writes in A Contribution to the Critique of Hegel’s Philosophy of Right (1844): “Religion is the sigh of the oppressed creature, the heart of a heartless world and the soul of soulless conditions. It is the opiate of the masses.” While the market economy provides goods, products and services it fails to provide any sense of transcendental purpose. The implication is that the masses are so alienated by the conditions of capitalism in which they live that they turn to religion in order to fulfill their spiritual needs. But Marx also states, “the abolition of religion as the illusory happiness of the people is the demand for their real happiness” (Ibid).

Marx rejects the metaphysical foundations of religion in a similar way to Nietzsche, viewing it as a socially-constructed phenomenon. He asserts, “Man makes religion, religion does not make man. Religion is, indeed, the self-consciousness and self-esteem of man who has either not yet won through to himself or has lost himself again” (Ibid). For Marx, the concepts of ‘God’ and ‘soul’ have no basis in reality but are merely a comfort to those who lack a sense of life’s meaning. This idea is similar to Nietzsche’s idea that people use religion as a means by which to empower themselves; however, Marx does not relate the empowerment of religion to the notion of a universal will to power. Instead, he views the psychological need for religious faith as a byproduct of the disempowerment caused by the oppressive conditions of capitalism. So Marx analyses religion from a socioeconomic perspective that’s absent from Nietzsche’s philosophy. Neither thinker seems to address the philosophical arguments for religious truth. Instead, they seek to understand religion as a social, cultural and psychological phenomenon.

Christian Morality as an Aspect of Power

Marx and Nietzsche’s theories of religion provide ideas concerning the origins of Christian morality. That is, although Marx never commented on this topic directly, his theory of class conflict can be applied to the development of Christian ethics. From this perspective, Christian morality becomes a tool of the ruling elite to maintain control over the means of production. Christian moral precepts, such as ‘Turn the other cheek’ or the ‘The first shall be last and the last first’, benefit the elite by promoting passive subservience among the working classes. If the proletariat actively resisted capitalist exploitation, a socialist revolution would be possible; however, Christian meekness enables the capitalist system to continue its exploitation of the working classes. So it could be argued that the notion of entering Heaven on the basis of one’s moral character helps the ruling classes maintain control over the means of production, since Christianity discourages the type of conduct typically associated with revolution, such as aggressive assertiveness, violence, and a desire for revenge. From a Marxist perspective, therefore, the bourgeoisie use religion as an institutional mechanism by which to manipulate the working classes and keep them in a state of non-resistance. 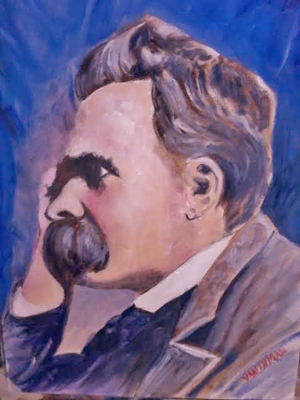 Nietzsche is similar to Marx insofar as he views Christian morality as an aspect of power. However, in other ways his perspective is antithetical to Marx’s. For Nietzsche, Christianity is the expression of ‘slave morality’ – the morality propagated by those who lack the strength to fully embrace life. In The Genealogy of Morals (1887), Nietzsche claims that the ancient Greeks characterized the qualities of the strong and powerful as ‘good’ and the traits of the weak as ‘bad’. However, in their resentment towards the aristocracy, the lower classes inverted the cultural paradigm and created a moral system that glorified the traits of the weak. This moral inversion was supposedly the beginnings of Christianity. It glorified the qualities of the weak, such as pity and selflessness, while vilifying those of the strong, such as assertiveness and self-reliance. This demonstrates a fundamental difference between the two thinkers: while Marx believed that the ruling classes developed religion as a tool of the capitalist elite, to prevent proletariat revolution, Nietzsche argues that Christianity provided the lower classes with a means by which to vilify the virtues of the aristocracy and achieve moral superiority.

Although Nietzsche never commented on Marx’s theories, he would have undoubtedly opposed Marx’s vision of an equal society. In Twilight of the Idols (1889), Nietzsche boldly proclaims, “The doctrine of equality!… But there is no more venomous poison in existence: for it appears to be preached by justice itself, when it is actually the end of justice.” Such a statement alone demonstrates the contrast between Nietzsche’s and Marx’s visions for humanity.

In Beyond Good and Evil Nietzsche asserts that philosophy is never truly objective in its pursuit of truth. He writes, “In the philosopher, there is nothing whatever impersonal; and above all, his morality bears decided and decisive testimony to who he is.” So for Nietzsche it is impossible for philosophers to remain impartial, since they are unconsciously influenced by their personal values, beliefs, and experiences. Furthermore, in Twilight of the Idols, Nietzsche fiercely attacks Immanuel Kant’s argument for universal moral truth, on the grounds that it reinforces a form of Christian morality. According to Nietzsche, Kant seeks to impose his subjective idea of what is right onto the world and gratify his will to power through the guise of objective moral philosophy, labelling him as an “underhand Christian, at the end of the day”. Nietzsche’s criticism of Kant and other modern philosophers highlights his critique of Western philosophy more broadly, which is that rather than being the result of objective inquiry, all philosophical ideas are manifestations of the will to power of those who create them. In this sense, it could be argued that Nietzsche was the father of postmodernism, since he denounced the existence of absolute truth and asserted that philosophers can never remain objective in their reasoning.

Marx differs from Nietzsche in this regard since he expands upon the ideas of modern philosophy. However, Marx’s critique of bourgeois hegemony also served as a basis for a broad denunciation of the Western philosophical tradition. Philosophy, said Marx, had emerged under the conditions of capitalism, and had failed to liberate the lower classes from economic oppression. As he famously proclaims, “The philosophers have only interpreted the world in various ways; the point, however, is to change it” (Eleven Theses on Feuerbach, 1888).

As you can see, both Nietzsche and Marx critique modern philosophy. However, Marx’s denunciation of it stems from his denunciation of capitalist economics, while Nietzsche thinks that all philosophical ideas are a manifestation of will to power rather than the result of objective reasoning. Once again, the difference between Nietzsche and Marx seems to lie in the fact that Marx analyses the development of Western philosophy within the socioeconomic context of class conflict, while Nietzsche views it as an expression of the dynamic will to power that guides all human behavior and reasoning.

Jack Fox-Williams graduated from Goldsmiths University in 2014 with a BA Honours degree in Philosophy and History. He is currently writing a book about the works of Nietzsche.

I am Not a Man I am Dynamite: Friedrich Nietzsche and the Anarchist Tradition

The State of Philosophy in the USSR

How Can Anybody Change Culture?

A Feminist Interview with Friedrich Nietzsche