Predrag Slijepcevic asks if organisms are better seen as singular or as composites.

The boundaries between the parts and the whole are almost non-existent on the canvases of the Renaissance painter Giuseppe Arcimboldo (1527-1593). Arcimboldo composed portraits of people out of pieces of fruit, sea animals, or flowers. Yet in spite of his unusual artistic vision, Flora may be a more authentic portrait than the Mona Lisa. 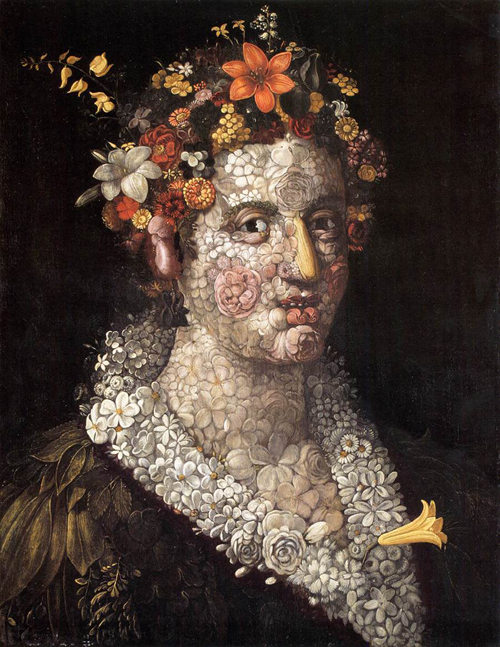 Here’s how I see it.

Arcimboldo’s vision is a good analogy for understanding the concept of the organism, which has undergone a dramatic transformation in recent decades. Symbiotic biology understands organisms in a similar way to Arcimboldo’s paintings. Absolute individuals do not exist.

The Greek word symbiosis means ‘living together’. Symbiotic biology is concerned with the construction of biological systems through mergers. On this understanding, organisms are biological systems formed by the merger of simpler organisms into more complex ones. Each complex organism is seen as a symbiotic collective rather than an independent individual. Group selection principles apply, such that natural selection selects the collectives which together form fit organisms. By contrast, for earlier mainstream biology, natural selection has been about the selection of individual organisms. This approach treated organisms as undisputed individuals, and did not recognize the role of collectives in the formation or behaviour. It sees group selection as a problematic concept. From the perspective of such mainstream biology, Lisa Gherardini, the model for the Mona Lisa, is one organism. We are blind to the components, the hierarchies, the populations, that make up the ecological collective of her body. But Flora is more authentic than Mona Lisa because Arcimboldo’s counterintuitive vision depicts the wholes as composites. Life is a set of transitional forms, or we might even say an organic composite form that is constantly changing. Evolution is the process of the change of the composites.

How would this work? Well, life began with microbes almost four billion years ago. Microbes built a giant system, a living planetary network of microbes, that altered planetary chemistry, for instance by oxygenating the atmosphere. Microbes also have their own precursor of biological communication. Eshel Ben-Jakob, physicist and microbiologist, was among the first to use the term ‘bacterial linguistics’ in such a context.

At least one billion years ago, the microbial planetary network produced the first symbiotic organisms, such as amoeba: eukaryotic cells, which are cells with a nucleus. These types of cells, which include most of the cells in human bodies, are formed from the combination of two types of microbes – bacteria and archea – when one type of cell swallowed the other but the other stayed alive inside it.

Amoeba and her relatives, known as the protists, playing games with bacteria, learned the crafts of construction with and communication amongst many cells. This merging of protist cells gradually produced multi-celled organisms from once free-living individual cells. Microbes immediately joined in to help generate super-symbiotic collectives called holobionts, which means a complex individual organism living with all its individual bacteria etc. All the organisms we see around us - humans, dogs, trees, fish - are holobionts. There are no plants or animals on the planet without associated microbiota. If you removed microbes from the biosphere it would collapse. Holobionts themselves formed social communities – societies of insects, plants, people… In this way, some social communities turned into what have been called ‘superorganisms’. The whole biosphere is a collage of diverse ecosystems: just like Arcimboldo’s group portraits.

At the heart of symbiotic biology is the principle of biological coexistence. Whether we like it or not, we are microbial partners. Our bodies are ecological systems that comprise forty trillion cells, each one containing tens, hundreds, or even thousands of integrated bacteria-mitochondria; and biologists estimate between forty and four hundred trillion more microbes which are not strictly speaking part of our bodies are present in our digestive tract and on our skin.

For symbiotic biology, life is a constantly changing and transitional complex form, and all organisms except the most basic microbes are types of chimeras – composite ecological systems thrown out into the biosphere by the thermodynamic storm of life, in the same sort of way that Arcimboldo painted human faces by merging seemingly incompatible images projected by the storm of his artistic mind onto his canvases.

Predrag Slijepcevic is a Senior Lecturer in Biology at Brunel University, London.

Hunting Down the Universe by Michael Hawkins

The Soup and The Scaffolding