E.T. Urso has some philosophical ambivalence for us especially for Valentine’s Day.

Assuming you’ll get married, choosing the right partner will be the most important decision in your life. The choice is so consequential that even the least romantic person – she who dismisses feelings as terrible guides to action – must take seriously the quest to identify the one. On pragmatic grounds, we’ll spend more time with the one than with anyone else, so we’d better like them. As imitative beings, we’ll absorb the one’s mannerisms, so we’d better esteem them. Our conversations will be limited to our combined capabilities, so we’d better pair well. In short our lives will blend. We may also biologically fuse through parenthood, spawning crawling creatures made from both of our identities. Naturally, then, the question ‘Who will we marry?’ excites us (if we’re optimistic) and stresses us (if we’re not). And as time passes and pairing prospects dwindle, whether from lack of opportunity or from our own ineptitude, we might worry if we haven’t fallen in love, which is the generally accepted Western method for identifying the one – a method so insane that it makes Berkeley’s idealism look super solid. 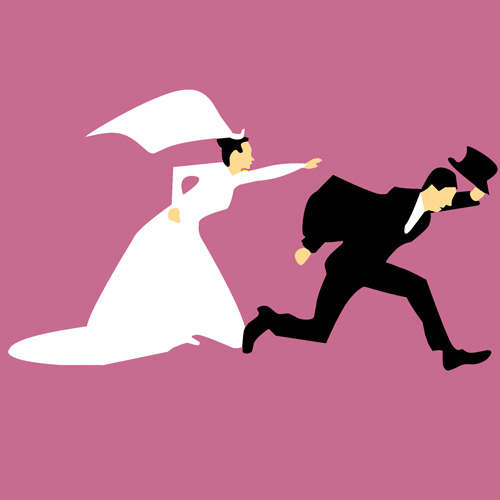 We glorify this phenomenon of falling in love so much that those still standing may feel inadequate. Impatiently we wait for our secular savior. Expectation likely contributes to our propensity to fall in love. But whether we’re primed for it or not, I’m not denying the reality of the phenomenon. The novels and movies are right. Falling in love is the most rapturous experience in life. But this rapture is often ill-expressed. In art, falling in love is described as a sort of whirlwind, a flaming passion that overwhelms reason; but in reality, I’ve found that the distinctive rapture of falling in love is an intense inner serenity. This serenity I believe derives from certainty. “This is it,” we think as we gaze into our lover’s gaze, like mirrors infinitely reflecting one another. “This is the person for me.” This certainty that they’re the one – is bliss. So there’s a sort of analytic truth aspect to love: like 2=2, it’s true because it’s true. We know they’re the one because they’re the one, without having to empirically test all particulars.

Then it happens. Gradually, almost imperceptibly… but at some point it becomes undeniable: the unshakable conviction that we had about our partner has given way to doubt, and we ask ourselves whether this person truly is the right person for us.

The reasons for questioning will be unique to each case, but they’re often a mixture of considered reflections and vague discontent. We’re just not as excited about it all as we used to be. Or often it’s an absence of feeling. We’re not disillusioned yet, we just sort of … sigh. Perhaps we’d pictured ourselves with someone more adventurous. Maybe we find ourselves reminiscing on an old friendship that could have been more: how our conversation flowed, tending toward topics of greater interest to us. Or maybe we’ve discovered that our partner is ‘fiscally shortsighted’, and we suddenly fear our financial future with them. Or maybe our partner is too judgmental; or too meek. Or they’re too uptight; or too wild – which was exciting at first, but we can no longer allow ourselves to love them unrestrainedly because part of us knows they’ll drag us into a dark place. The reasons for questioning will vary, but what I want to highlight is something more universal: a fundamental change in attitude. While before we were in a state of certainty about our partner, now we are in a state of uncertainty. The very question, ‘Is this person the right person for me?’ marks a fundamental change from when we fell in love. I’m not saying we no longer consider them worthy. In fact, we still believe they might be the one. But part of us questions that belief, and considers the contrary possibility. We’re suddenly unsettled, pulled in both directions and inwardly torn, and so in an entirely new state, no longer unquestioningly wholehearted. I’ll call this state ambivalence. Ambivalence has destroyed every relationship I’ve ever been in.

So I’ve started to wonder, does the very presence of ambivalence presage the failure of a relationship? Is ambivalence, by definition, the death of love? Or can love withstand profound doubt? Is it possible to deliberate about being with someone, and happily live with that decision, even if we’ve lost our rapturous certainty?

My belief, unfortunately, is that the ‘death of love’ option is true. If I’m being empirical, in every instance so far observed by me, ambivalence has proven toxic. Indecision seems to indicate that I’m no longer devoted: it doesn’t feel right anymore; doesn’t feel pure, it feels forced, untrue. And so alienation begins. And ultimately, I can’t deal with the dissonance. My inner schism is projected outward, and in one way or another, the relationship ends.

I’m stoical by nature, and probably as a reaction to this, I’m strangely reverent of emotions. I care about how stuff feels. But it might help us to question the romantic notion that feelings are foundational in relationships. To do so, let’s return to the Least Romantic Person mentioned earlier, and ask what she thinks about certainty and ambivalence. Let’s first examine that rapturous certainty experienced when we fall in love. Our Least Romantic Person would ask:

“What do you mean by ‘certainty’? It sounds like it was a feeling of certainty, or at most an intuition or a sense of conviction: but it definitely wasn’t an analytic certainty like those of mathematics, as cute as your earlier simile was. ‘2+2=4’ is an analytic truth – essentially a tautology – in which the truth of the statement is determined simply by the meaning of the terms in the statement. Unfortunately, other than by this kind of ‘certainty by definition’, absolute certainty is impossible to attain. Even the most rigorous scientific theories, with loads of supporting evidence and double-checked sound reasoning, can only claim to be probably true. Certainly, your conviction that you’d found ‘the one’ met neither of these criteria. In fact, when you started asking yourself ‘Is this person right for me?’, that was the first time you started thinking properly. Only by questioning can you determine whether your partner is right for you – not through mystical intuition and fickle feelings, but by inquiry and reasoning. Don’t you find it suspicious that you were so sure, early on, when you didn’t know them as well as you do now? And only after knowing them more, empirically, through prolonged contact, do you begin to wonder… Ambivalence, this new state that you fear has spoiled everything, is actually allowing you to ask the right questions with a cool head – to make a reasonable choice. Don’t despair. Be grateful that you can think and determine your fate. I cannot help you with the ultimate deliberation, because each case is different and the details matter; but I can tell you that you can decide. And in my opinion, this thoughtful deliberation is a more substantial form of love in any case. If you care about each other, you’ll think about whether you’ll make each other thrive. You can analyze your partner; you can analyze yourself. I’m not a feelings person, but if that magic matters to you – the spark, the spell, the connection – who am I to contest it? Use this moment of uncertainty – which is the first step toward knowledge – to reflect, project, and discuss, with no hard feelings: are you right for each other?”

Thank you, Least Romantic Person. We appreciate your take, and kind of like it, too, for it frames ambivalence more optimistically. But I’ll tell you, Least Romantic Person – as a romantic myself, I love the feeling of being in love. Sure, you might call it a reckless intuition, but there is something valuable in it, which might not matter to a rational spirit, but which is lifeblood to me. Moreover, I think reasoning is subservient to our longings. Even scientists working meticulously in the lab must be driven by some desire – by their passion for discovery. We cure diseases because we value life. And for me life’s most rapturous experience is falling in love. Now that I’ve become ambivalent, something primal is lacking, and the drive, the desire, is dulled. I can make a list of pros and cons about my partner, and turn out a negative or positive sum, but in either case I’ll feel the same. Something’s been lost. And in my blunt days I’ll think, ‘If I’m not feeling it anymore, what’s the point?’ I’ll wonder if there’s someone out there I’d be in love with forever. After all, we hear of those couples for whom that special thing remains throughout their lives. Is it possible that our bodies know something about love before we’re able to articulate it – in other words, before we’re able to provide reasoning? When we fell in love, we experienced with our entire bodies a conviction that gave us peace, unity, drive. Now that peace is lost. We’re fragmented and full of doubts. Does our body know it’s over, and now the intellect is merely appointing reasons?

The Least Romantic Person is wary of sweeping feelings, and suggests for us to mind the details. We can ponder points of compatibility, and if they’re substantial, choose our partners anew, deliberately, gaining a new kind of logically-induced peace which admits imperfections such as dissimilar interests. Take hiking for example – a notoriously polarizing activity. Some people love it; some people hate it. It sounds trivial: but what if to our partner hiking isn’t just the pain-in-the-ass-walking-to-arbitrary-points-in-mountains that it is to us? For them it’s more the conversation, the shared sensations, the connection to nature. This divergence may be one of several, but perhaps our partner (who we’ve discovered is also now feeling ambivalent) decides they can keep that part of life to themselves, and that our relationship is valuable for other reasons. Couples can consider all the variables, the traits we admire and disapprove of in each other: temperaments, shared memories, family, level of mutual respect, loyalty, intelligence, beauty, natural affinity, moral values… We can think about it all to make the most important decision in our lives. But then there’s that feeling – the aforementioned vague discontent, or lack of feeling, which has recently dulled our relationship. This feeling is significant to me, while the Least Romantic Person doesn’t trust feelings at all – they’re volatile and flimsy and can’t be the foundation of a committed relationship. And yet. And yet… We may choose to end a relationship because of lack of feeling, or as they say, because we’re not in love anymore. We can do it, and depending on our disposition, it might even be the right thing to do. As long as we’re aware that we’re ending things quite simply because we’re not feeling it anymore.

E.T. Urso is a Honduran-American screenwriter. Author of The Folly of Faraway Things, Urso is currently working on a philosophical novella inspired by Dostoevsky’s Notes from Underground.

Iris Murdoch & The Mystery of Love

The Book of Love

The Philosophy of Romantic Love