Raymond Tallis perceives a difference between them.

The relationship between perception and reality has preoccupied Western philosophers since the pre-Socratic thinker Parmenides proclaimed that our senses deceive us. “Do not be guided by your dull eyes, nor by your resounding ears, but test all things with the power of your thinking alone” he proclaimed in On Nature (c.475 BC), setting in train a conversation that shows no sign of abating, even less of reaching a conclusion.

There would seem to be a strong case for looking with beady-eyed suspicion upon our beady eyes. Objects which we believe are unchanging look different when observed from the front or the back, from near or far, in bright light or dim. We see colours, hear sounds, taste flavours, and smell odours, but these do not inhere in the unconscious material world to which we ascribe them. We experience illusions, such as the bending of a stick plunged into water, or hallucinations which are entirely the fabrications of our minds. 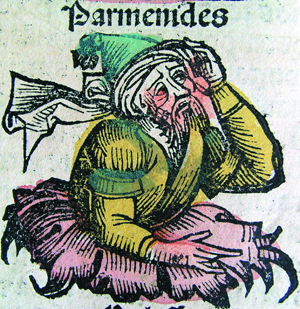 While these phenomena have all been cited in the case for the Parmenidean prosecution, they are perhaps not as damning as some philosophers have suggested.

The seemingly most disturbing aspects of perception – hallucinations and illusions – are actually the most easily dealt with. The claim of an hallucinated apple to be real is easily discredited if I attempt to eat it. As for the bent stick, any deception can be cured by lifting it out of the water or successfully inserting it, while it’s still under water, into a straight pipe.

Our ability to dispel illusions and hallucinations by testing them against other experiences is a reminder of the extent to which our encounter with the world is not just a matter of isolated perceptions or sensations associated with single senses. Seeing, it is said, is believing; but touching, grasping, and handling visible objects may help to give a firmer foundation to our beliefs. The apple we see, if it is a real apple, can be handled, weighed, and eaten. We may see additional evidence of its reality through its interaction with other stuff in the world; for example, the branch springing back when the fruit is picked; or the crunching noise and the appreciative murmurs of someone with whom I am sharing the fruit.

Importantly, perception is not a mere spectator sport. We engage actively with the world delivered to our senses. Looking is not passive gawping: I scrutinize, test, even measure what I see. That’s why the different appearances of objects seen from different viewpoints do not usually deceive or confuse us. The retinal image of a tree varies with my distance from it, but I do not conclude from this that the tree itself grows and shrinks. My walking towards or away from the tree spells out in lived experience the changes in its distance from me. Moreover, the tree’s size relative to the items close to it will not change. It remains twice the apparent height of the wall next to it as it and the wall shrink in tandem, while objects between me and it will be registered accordingly. Finally, when I see the tree, I am aware that I am seeing it, and seeing it from a viewpoint – a lived, active, viewpoint that tells me where it is relative to me.

Does all this, however, constitute sufficient reason for believing that there is more to objects than what is revealed to us through our senses? Something more seems to be required to persuade us that our experiences are of something that transcends those appearances. Our intuition of objects as entities that not only exceed what we are experiencing at any given time, but are more than any mere succession of experiences, is rooted in our experience of ourselves as embodied subjects. It is worth dwelling on this.

My experiences of the world out there are had by a subject who is also a body. My body is not presented to me, the subject, as a mere succession of disconnected experiences. Rather, there is an unity of my apprehension of my embodied self as it is spread over the space occupied by my flesh, such that my head, my torso, my arms and legs are one in virtue of being mine. My relationship to my own body delivers the sense of something that is more than what I sensorially experience of it. The sense of bodily coherence over time as well as space is inseparable from my sense of myself as an agent unified in space and over time. This is highlighted, throughout my waking hours, when I am busy doing things, whether something simple like walking across a room to pick up a book, less simple like laying a table, or even less simple such as building an out-house. But neither of these senses are actual sense experiences.

This idea of our own bodies as ‘primordial objects’ – as primary instances of entities that are more than mere collections of sense experiences – was echoed by Willard van Orman Quine in From Stimulus to Science (1995): Our “bodies are the first objects to be taken as objects. It is on analogy to them that all further positing of objects takes place.” Our sense of our selves being identified with our flesh transforms our patchy sensory experience of said flesh into the experience of something that has a continuous existence in itself beyond that patchy experience. While the spotlight of bodily awareness moves around, the continuing reality of those parts that are not currently in the spotlight is underwritten by their inseparability from those parts that are. This idea of continuity is then generalized to other objects in the outside world with which our bodies interact.

Our sense of the perception-independent reality of what is out there is reinforced by our fellow human beings underwriting a shared world. You and I can engage with the same entities and compare our experiences, reporting to each other to confirm what it is we are both seeing. We may have different experiences of the same object when seeing it from different viewpoints; but the similarity of our experiences when we look at the same object from adjacent viewpoints seems to confirm that the object has a reality beyond our individual experiences of it. Indeed, the reality beyond our perceptions of what we perceive, is inseparable from the activity of our shared lives, and the joint engagement of our living bodies with a world in which we meet our biological and social needs. We are not therefore in a state of permanent confusion due to being situated in a world of objects whose appearance depends upon how or from where or under what conditions we are experiencing them. We are also, for the most part, able to distinguish between truthful perceptions and illusions or hallucinations – a distinction that would have no basis if all perceptions were illusory, hallucinatory, or in some sense misleading.

So that’s all right, then.

Reality With & Without Perception

Not so fast. We haven’t adequately addressed the Parmenidean rejection of the belief that our senses give us access to reality. Or rather, we have been talking about existential or lived reality, and consequently have not been digging deep enough. What preoccupied Parmenides, and many philosophers after him, is not existential or lived reality, but metaphysical reality, or as we might say, the reality of being in itself. While some appearances are more valid than others, and we can sort out hallucinations from true perceptions, we may still have reasons for thinking that what is made available to our senses is merely appearance, understood not as a revelation of, but a veil over, fundamental reality.

After all, ordinary, untutored, perception of what is out there is open to scientific correction, a process that in the last century has developed to an extraordinary degree. Quantum theory and general relativity remind us that there are accounts of reality, seemingly authoritative because they vastly extend our capacity to describe, predict, and manipulate our surroundings, that are remote from what we see and hear in busy everyday life. While fundamental science takes its original data from sense experience and is ultimately tested against experience, its contact with the unmediated deliverances of our eyes and ears is limited. The measurements, the instrumentation, the theoretical framework of physics, have become very remote from the world directly presented to our senses.

But there’s an even deeper reason for taking seriously Parmenides’ rejection of the testimony of our senses. Perception is seen by most contemporary philosophers to be the product of a causal interaction between the perceived object and the brain of the perceiving subject: the object causes appropriate discharges in the nervous system, which the brain somehow processes to create experiences of the object for the person perceiving it. The difference between the experience of, say, an apple and an hallucination of an apple, is that in the former case the brain activity is caused by an apple and in the latter case the brain activity occurs without one. Even if this causal theory does not explain how effects in the brain are ‘about’ the object that caused them (a point that I’ve touched on more than once in this column), it highlights something central to – and for some philosophers questionable about – perception; namely, that it is interactive.

To see why this may be a worry, let’s envisage a mode of knowledge that was not interactive, where instead objects-in-themselves, matter, mass-energy, ultimate being (whatever it is) were self-presenting, as if their givenness to perceivers were built into them. In the absence of the subject being required to elicit the presence of the object, there would be no ‘contamination’ of the object by its interaction with a perceptual apparatus. The perceived object would be calling all the epistemic shots, by presenting itself as it really is.

Alas, this is a self-contradictory notion. It requires us to think of objects as having an intrinsic appearance, even when appearing to no subject. But what appearance would such a tree have when seen from no-one outside of it? Would it be the sum total of all its possible appearances? How would the back view and the front view, the view from near and from far, from inside and outside, at this scale of attention and that scale of attention, in bright light and dim light, all be reconciled?

The idea of an uncontaminated appearance revealing the world as it is in itself nevertheless still haunts those philosophers for whom reality as the object of thought is superior to the lived shin-barking push-and-shove existential reality of daily life. We are teased by Parmenides’ idea of a realm lying beyond the reach of our senses. It was this realm which Immanuel Kant – the greatest and most influential philosopher since Plato – called the featureless ‘noumenal’ realm – by which he meant the world as it is in itself, grounding our experiences of the world but not revealed in them. We should be grateful perhaps to this self-contradictory idea for giving humanity permission to develop world pictures at odds with sense experience – notably those of science – which have mysteriously proved so fertile in transforming our understanding and enhancing our experiences.

How Can I Know Anything At All?