Henk Manschot is Professor Emeritus at the University of Humanistics in the Netherlands. Amirali Maleki interviews him about Nietzsche’s approach to philosophy and life.

A very interesting question. I think that philosophers, like every human being, are embedded in their daily environment and their perceptions of it. But what makes a philosopher great is that he or she reflects on the images, ideas and emotions he receives from his education, culture, and religion, and comes up with new ways of perceiving and feeling the world around them. This is in particular true for Friedrich Nietzsche (1844-1900). In place of philosophy as an academic study, Nietzsche advocates a personal engagement in which living and thinking are continually connected. As I explained in my book, Nietzsche and the Earth (2020), Nietzsche left the academic life and the decadent culture of the city of Basel in Switzerland, and started a completely new way of living for himself, striving for a radical new connectivity with ‘the living earth’. I wrote in my introduction that if we want to walk in Nietzsche’s footsteps, “a new philosophy of the earth demands of modern humans that they reconnect with the natural world around them in their daily lives.” We soon realize, however, how difficult this can be. What does restoring contact with nature mean for our lives? And what new kinds of thought and reflection emerge from it? In an attempt to answer these questions, I followed Nietzsche’s life and showed how his way of thinking changed, step by step. Instead of the academic philosopher he once was, he became a walker, writing aphorisms about what inspired him, and defining life as one great experiment.

What does it mean to reject the disconnection of humanity from the planet on which we live? Doesn’t everyone interpret life in their own way because the planet, or, as I would put it generally, everyday life, always appears to them in a way that’s connected to their society and history?

The question how far and how radically people can disconnect from the ways of thinking and feeling they’ve inherited by education and socialization is a big one. But philosophy starts when a human being becomes aware of his or her historical embeddedness and takes a position towards it. A phenomenological way of doing this, for instance, is to temporarily ‘put into brackets’ all your settled ideas and try to open yourself as much as possible to what then appears in your perceptions and emotions. In my book I styled Nietzsche’s approach to nature as ‘phenomenology avant la lettre’: he was studying his own experience and his response to the world before the study of experience [phenomenology] became an academic discipline. But Nietzsche was well aware that, fundamentally, it is impossible to disconnect yourself in-depth from the ways your life and mind are framed – for instance by your mother tongue. In his words, there is always a text written over the grundtext of Homo natura.

Don’t you propose an approach influenced both by Nietzsche and Spinoza? That is, a unity which considers man to be equal to nature and, so, to Spinoza’s God?

Nietzsche admired Spinoza in the first phase of his thinking, before 1881. He wrote about him, “I have a precursor, and a great one.” But his enthusiasm didn’t stay hot for long. Spinoza became for him a too-rationalistic philosopher, and he considered Spinoza’s ‘asceticism’ as somewhat suspect, and his ‘mysticism’ incomprehensible. Nietzsche himself never adopted Spinoza’s mantra Deus sive natura [‘God, or Nature’] as far as I know. But in the history of philosophy other people have made the connection between the two thinkers. There are certainly links.

Doesn’t Nietzsche try to refute Descartes’ abstract rationalism and instead promote the importance of culture and life? Isn’t this his response to the industrialization of the world that Nietzsche hated?

Nietzsche radically criticized the Cartesian framework in many ways. He rejected René Descartes’ division between body and mind (or soul); thinking in terms of subject/object divisions; and the distinction in value between humans and all the other living beings, including the idea that the human being is ‘the master and owner the world’. All these ideas had become incarnated in what to him was ‘modern culture’. But Nietzsche’s scepticism regarding the dominant culture was accompanied by an intense desire to look at culture in a completely different way, and to create a life that in his view was worthy of the name. In Thus Spoke Zarathustra (1883), he has Zarathustra address all this, raising fundamental questions about morality, religion, and art. Nietzsche tells us that if modern humans want to get back into contact with the earth, we must dare to make the meaning and significance of a ‘grounded’ human life our central concern. Nietzsche therefore examines modernity’s hostility to nature and the core values upon which this hostility is based. His aim is a culture that will once again make the universe, and especially the earth, a guide to humanity. He is not focused on cognitive or rationalist ‘truth-finding’, he is looking for a more aesthetic, pluralistic, and diverse idea of culture. Art, music, theatre, creativity in general, has to play a fundamental role in the construction of a new culture of ‘great health’.

In Nietzsche and the Earth you consider the ‘art of living’ in relation to environmental issues. Does living require ‘art’? Doesn’t the art of living show every person the way he or she is supposed to go? And should everyone follow the same principles?

Philosophy conceived as primarily an ‘art of living’ rather than as a discipline of constructing theories and argumentations or as analysis of language and discourses, has been promoted in the last twenty years by philosophers such as the Frenchman Pierre Hadot and others. Even Michel Foucault is related to this tradition in his idea of ‘care for the self’.

Nietzsche is one of the inspirers of defining and practicing philosophy as questioning old and promoting new ways of life. A main motif in his philosophical practice is to be a provocateur who challenges not only people’s ideas but also their gut feelings. Freeing oneself from old ideas and ways of living opens a new space – in his metaphorical language, an ‘open sea’ – where the person has to find or create his own new direction and image of what ‘a good life’ could mean. 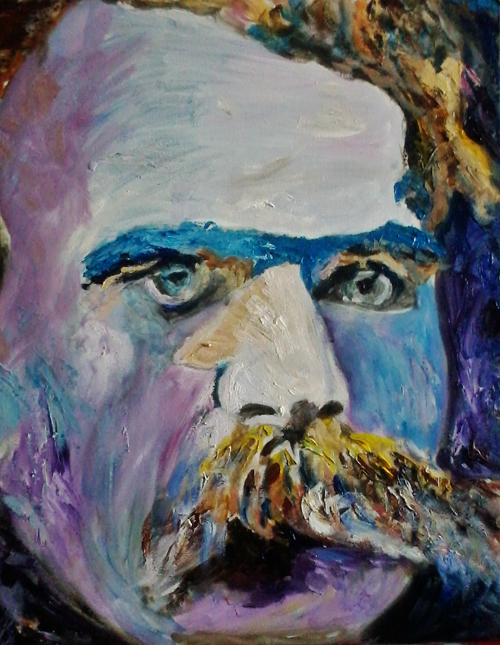 The strength of Nietzsche’s approach derives from the fact that he tries to combine two positions which are at first glance contradictory. On the one hand he is as radical as anyone in standing by the guiding principles that, freed from our past, we must become who we are, live our own lives, and be led by whatever truly does us good and makes us happy. But on the other hand, he leads us to the recognition that this highly personal orientation can reach its goal only if people start to behave as links in the larger process of life, which has not by any means been explored in all its most hidden, sometimes mysterious, potentials.

What affects me personally most is that in his striving for freedom and for a principled lifestyle, Nietzsche takes as his starting point the restoration of his bond with nature. He makes of this a personal experiment, from which comes his commitment to a different future from that to which modernism would lead us. He becomes increasingly sensitive to the happiness of animals, to the circular rhythms of nature, to the beauty of the earth and the insight that humans are interwoven with life on earth as a whole, in countless ways. Making himself a participant in life in the largest sense was therefore not an abstract theme for Nietzsche, but a guiding principle of daily application. There arose in him an intense desire for the ‘man of the future’ – the type of person whose coming “makes the will free again, which gives earth its purpose and man his hope again” (Genealogy of Morals, §24, 1887). Can we keep that hope alive and nourish it without lapsing into naive optimism or passive quietism? The best way to do so, Nietzsche seems to suggest, is not to be led by fear and pessimism, even if sometimes we can see no way forward and are close to being overwhelmed by dire predictions about the future. We need to have faith that coming generations will discover opportunities and set out along roads that today’s generations – myself included – cannot see. “At this point just one thing is proper,” Nietzsche writes. “Silence: otherwise, I shall be misappropriating something that belongs to another, younger man, one ‘with more future’, one stronger than me” (GM, §25).

This way of thinking illustrates, I hope, what philosophy defined as ‘an introduction to a new art of living’ could mean.

• Amirali Maleki is a law student living in Karaj, Iran. He has written for many famous Iranian journals, such as Siyasnameh, and specialises in the philosophy of politics and law.