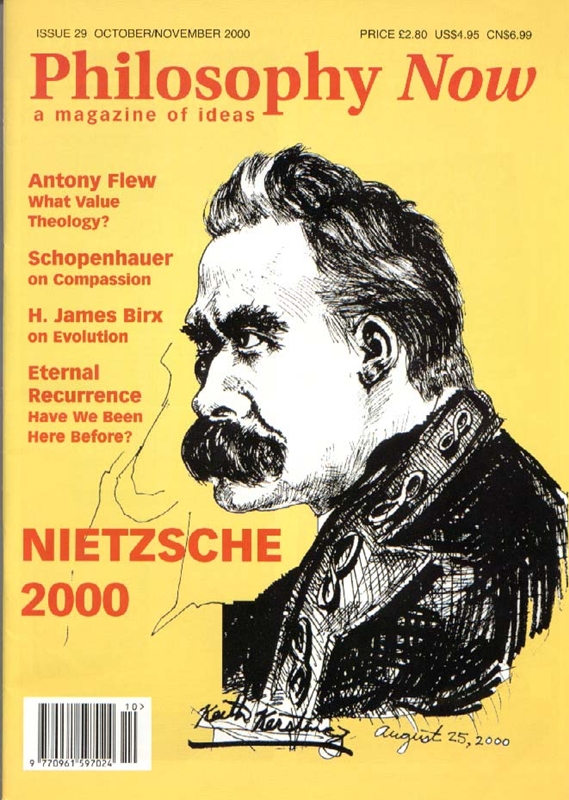 A Philosophical Illumination or A Delusion?

Stefan Sorgner on Nietzsche’s still-controversial influence in the land of his birth.

Bill Cooke on the humanist value of Nietzsche.

J. Harvey Lomax on the love of eternity.

Nietzsche rejected all conventional morality but he wasn’t a nihilist – he called for a “re-evaluation of all values”. Alexander V. Razin describes the gulf separating him from that other great moralist, Immanuel Kant.

An introduction by H. James Birx.

Astrophysics & the Question of Sample Size

Michael Philips on the search for cosmic laws and theories.

Bertrand Russell argued that the time spent working by an average person should be drastically reduced, work being an overrated virtue. Paul Western believes that ‘idleness’ is still not valued highly enough.

Charles Fethe on the Wisdom of Repugnance.

Can religious beliefs be disproved? If not, what does this imply? 1950 saw the first appearance of a short article which changed the way theologians look at the problem. Antony Flew describes the circumstances in which he wrote it, and we mark the anniversary by reprinting his original article.

David Papineau and Ted Honderich recently locked horns at Borders Bookstore in London, in a debate organised by Philosophy For All and Philosophy Now.

What Nietzsche Really Said by Robert Solomon and Kathleen Higgins

H. James Birx looks at some books on Nietzsche.

Timothy J. Madigan looks at some other books on Nietzsche.

What became of the raucous laughter and inspired slapstick anarchism of the early silent comedies? Our regular film commentator Thomas Wartenberg traces the trajectory of film comedy from laughter to romance.

A short story by Stephen Loveless-Rees.