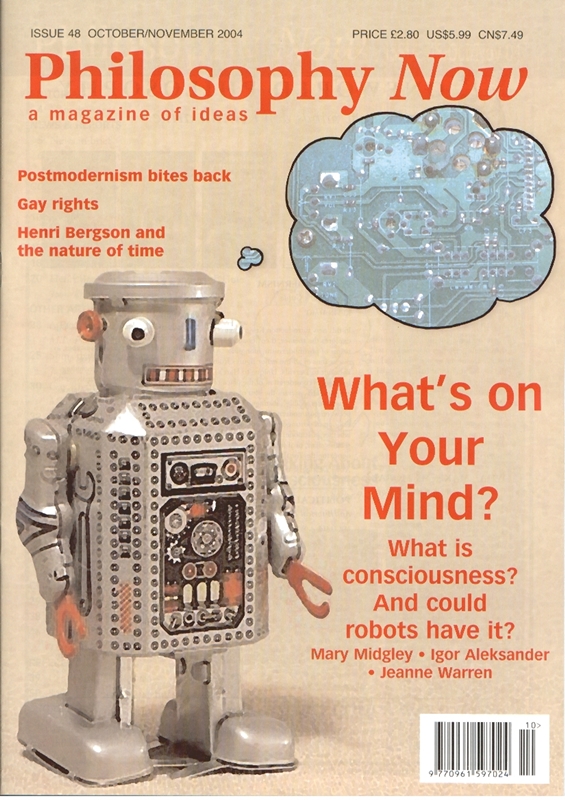 A five-minute guide to the debate by Rick Lewis.

Henri Bergson and the Perception of Time

Know the name, can’t quite recall what he thought? John-Francis Phipps explains the surprising ideas of the philosopher of vitalism.

Jeanne Warren on a philosopher of personality.

In which Mary Midgley discusses the nature of consciousness and argues that the legacy of Descartes is disasterous for our view of ourselves and our planet.

A dialogue between Marcel Proust and his valet, overheard by Mike Fuller.

Michael Voytinsky says that the choice versus nature debate is irrelevant to the question of gay and lesbian rights.

Humanism on the Front Line

Toni Vogel Carey on a memorable but forgotten scientist and philosopher.

Ships that should Pass in the Night

Jason Wasserman on balancing the claims of Postmodernism and Critical Realism.

The Psychology & Psychopathology of Philosophers

Igor Aleksander is a leading researcher on machine consciousness. Julian Moore asked him about brains and language, self-awareness and robot rights.

The History of the World, Part 2

Consciousness: Creeping Up on the Hard Problem by Jeffrey Gray

Kenneth Shouler praises Lawrence and Charlotte Becker for producing an encyclopedia of ethics which is truly encyclopedic.

Our philosophical film guru Thomas Wartenberg is charmed by Before Sunset but thinks it fumbles an opportunity to examine one of the genuine philosophical problems of growing older.

I Am Dan’s Brain

Memoires of a much-travelled mind, as revealed to Terry Dartnall.