The philosopher Ludwig Wittgenstein (1889-1951) was a difficult, intense man with a short fuse. He formed deep friendships but alienated many of the people close to him. Some were frightened of him. All were impressed by his intellectual integrity. His students at Cambridge used to copy his mannerisms. Wittgenstein stories and anecdotes abound, tending to emphasise his oddness, intensity and his strange purity. It is said that in Cambridge he used to do his thinking sitting in a deckchair under an electric fan in an otherwise bare room. After lectures he would go to the cinema to empty his mind; he particularly liked Westerns and would sit in the very front row so that he felt engulfed by the action. He once said that he didn’t mind what he ate, so long as it was always the same. Allegedly he once turned up for a posh dinner party wearing oilskins, having cycled across Cambridge in the rain. His hostess asked “But Ludi, where is your dinner jacket?” “Underneath!” replied Wittgenstein. “But I thought you were staying overnight – where are your pajamas?” “Underneath!”

After we announced that we would be publishing a Wittgenstein issue of Philosophy Now, we were flooded with articles – enough to put together at least three issues! We picked the ones that seemed to fit together nicely and apologise to the many contributors for whom we couldn’t find room. But why the huge response – what is so special about Wittgenstein anyway? He attracts this kind of interest partly for his extraordinary personality but mainly for what he said – for revolutionising philosophy twice over in one not-particularly-long lifetime, as we shall see.

Convinced by the success of our ‘Dear Socrates’ column that there is something to this paranormal business after all, I thought it would be a good idea to invite Wittgenstein himself to compose the editorial for this issue in his honour. Having successfully contacted him via a medium, I set the tape running:

“Dear reader, welcome to this special issue .... [Loud stage whisper] What? That is an utterly stupid suggestion! Why should the reader want to know anything about me? It is the ideas alone that count!... Welcome to this issue. We will be discussing the nature of language. I used to think that language was about constructing logical pictures of the world, and that any remarks that couldn’t be construed as pictures were therefore utterly meaningless. That included any talk about ethics and religion, vital though they are. Later...” [At this point there was a 2 hour silence while the medium drummed his fingers on the table and stared out of the window], “Later I thought that language was more like a set of tools. You use different tools for different tasks. Or maybe language is like a game, which is meaningful between people who accept the rules of the game. Different people play different language games in different situations. [At this point the medium stared at me with great hostility] I can’t think of anything else to say. I have no ideas today .... In different situations. Most philosophical problems are a result of mistakes about language. I want to show people where those mistakes are, so they can stop bothering with philosophy. Your readers are probably quite intelligent – why are they wasting their time reading this? Never mind. I will do them a favour by showing them what a mistake it all is. Then they will all cancel their subscriptions and you will have to get an honest job working in a factory.”

After this, Wittgenstein would add nothing further. To fill the rest of the page, we have therefore decided to print this picture of a house in Vienna – the only building to be designed by Wittgenstein during his brief career as an architect in the 1930s. 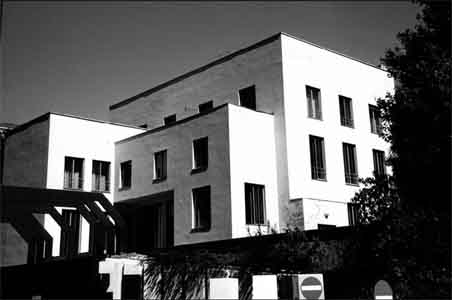 From Wodehouse to Wittgenstein by Anthony Quinton