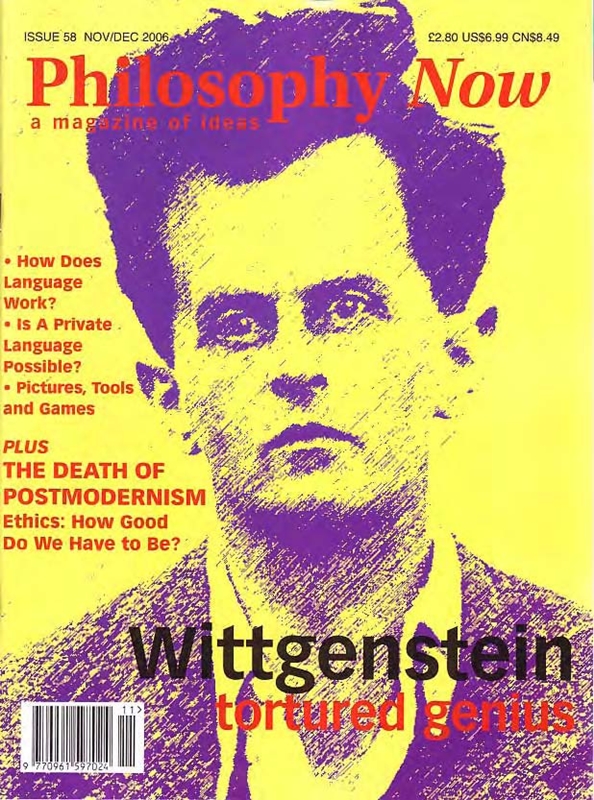 George Wrisley considers how some of Wittgenstein’s later ideas on language relate to reality.

Bob Plant and Peter Baumann relate some lesser-known anecdotes about the great man and his acolytes.

Peter Caws considers how much is lost in translation.

Tim Madigan on logic, language and mysticism in the life of one of the most influential philosophers of the twentieth century.

To be or not to be brilliant? Miriam Abbott on the ontological argument for God’s existence.

How Good Do We Have To Be?

With so many serious problems in the world, Jean Kazez asks whether there’s any excuse to buy ourselves new toys, or even take up more worthy pastimes like playing the violin. Her reflections take in Paul Farmer, Peter Singer, Susan Wolf and Nietzsche.

The Death of Postmodernism And Beyond

Alan Kirby says postmodernism is dead and buried. In its place comes a new paradigm of authority and knowledge formed under the pressure of new technologies and contemporary social forces.

Peter Hacker is the leading Wittgenstein scholar at Oxford. Li Hong asked him about Wittgenstein and analytic philosophy.

Having returned from the turn of the Fourth Century B.C. to the turn of the Twenty-First A.D., Socrates has eagerly signed on as a Philosophy Now columnist so that he may continue to carry out his divinely-inspired dialogic mission. This issue he calls in the hippes [cavalry, man].

What is a Thought Experiment, Anyhow?

I am Not a Man I am Dynamite: Friedrich Nietzsche and the Anarchist Tradition

Robert Cheeks finds Elizabeth Campbell Corey’s analysis of Oakeshott’s philosophy to be all present and correct.

Thomas Wartenberg sees two films about 9-11 and muses that sometimes more than courage is called for.

Bill Welton rewrites some familiar songs to give them philosophy appeal – including some carols for Christmas.

Making Up My Mind

Martin Lunghi gets into some strange tendencies with language.