Answers For Aristotle by Massimo Pigliucci

With a title such as Answers for Aristotle, you might think that Massimo Pigliucci’s ninth and latest book is full of replies to questions the ancient Greek couldn’t settle himself. You’d be wrong. Professor Pigliucci apparently intended the title to be The Intelligent Guide to the Meaning of Life – playing off the high-selling books of the ‘Idiots’ Guides’ series. Oh well. As ever, authors propose, and publishers dispose.

Putting aside the title, the originality of the content piques the attention and sustains it. In this very readable philosophical page-turner, Pigliucci argues for and demonstrates an approach towards knowledge which he describes as ‘sci-phi’ – short for “the wisdom (and practical advice) that comes from contemplating the world and our lives using the two most powerful approaches to knowledge that human beings have devised so far – philosophy and science.” (p.2.) This combined approach is essential in tackling philosophy’s big questions, Pigliucci thinks. Pigliucci describes Answers for Aristotle as “an excursion, aimed at the general public” which at bottom is “the practical conjunction of science and philosophy.” It is the approach epitomized by Aristotle – at once a philosopher of the highest rank and a field scientist trained in biology.

I believe you can tell a great deal about a philosopher if you ask him to rank his top five philosophers. For Massimo Pigliucci the five are: (1) David Hume, (2) Aristotle, (3) Bertrand Russell, (4) Socrates and Plato tied, and (5) J.S. Mill. Notice the Hume and Socrates nominations: few, if any, bad arguments ever escaped their philosophical sniff tests, and one sees ample evidence of the same sort of vigilance and counter-argument in Professor Pigliucci’s work. Whether it’s other recent books, such as his Nonsense on Stilts: How to Distinguish Science from Bunk, or his blog Rationally Speaking, he is a prolific writer whose lively prose melds Socratic reasoning and science to elucidate ideas, and, occasionally, expose the peccadilloes and prejudices in academic or public discourse. In this book, perennial questions of morality, meaning and love are analyzed from “the joint perspective of the best science and the most compelling philosophy available to date.”

But how much science is needed to attain what Aristotle (384-322 BCE) called eudaemonia or ‘well-being’ – that is, a happy life? After all, doesn’t the man from Stagira argue that akrasia (literally ‘lack of mastery’) rather than a lack of knowledge per se, is the major cause of moral failure?

Let’s suppose that Jones agrees with Aristotle’s akratic diagnosis of his (extensive) moral problems. How would scientific knowledge of fatty foods, tobacco, alcohol, unsafe sex, and so on, help in keeping Jones from backsliding? Doesn’t his moral success depend rather on his conquering his excess, i.e., his ability to modify (master) wayward behaviors grounded in his upbringing, and finally win out over his temptations, as Aristotle’s enkrates (‘morally strong man’) does?

Surely it does; but why worship the either-or? Jones’s success in leading the good life also depends on factual knowledge about the uses of human behavior and their consequences. As Pigliucci points out, if someone knows that imbibing alcohol affects his insulin release and therefore makes him hungrier, he might make use of this science to get a better hold on one of his akratic tendencies by cutting down on alcohol, and so hunger, and so over-eating. 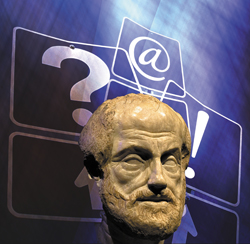 The same joint sci-phi approach serves us well in deciding issues in applied ethics. Someone might think that she can solve ethical problems about runaway trolleys, and questions about euthanasia and capital punishment, and every other hot-button ethical issue, without help from science. After all, after seeing the 60 Minutes videotaping of Jack Kervorkian’s euthanizing of Thomas Youk in 1998 – which led to Kervorkian’s arrest for murder – one might ask how much science was needed to see from Youk’s agonized reports of his experience and his visible condition that he was in constant suffering, and thus deserved a choice of euthanasia or palliative care. But it was science that showed that he was in the end stages of amyotrophic lateral sclerosis. And as Pigliucci reminds us, if your philosophical analysis of the issue of abortion leads you to conclude that abortion is permissible up to the point at which the fetus begins to feel pain, you then need science to give you information concerning when that turning point actually occurs.

Science and philosophy mesh in other, less episodic ways. For example, statistics aplenty demonstrate the mayhem that can result from driving while text messaging. One study by Car and Driver Magazine showed that it is more distracting to drive while texting than it is to drive drunk. These statistics build a strong inductive case against such risky activity, which ought to dissuade drivers from driving while texting, thus saving lives. But in this case the science is incomplete – and this is aside from the Humean difficulty with deriving an ought from an is – so it may not have an effect unless the agent is ethically grounded enough to know and care that injuries or deaths sustained in this way are undesirable, making the possible costs of text-driving too high to risk it.

In one place, it may be that the author’s avowed preference for Aristotle’s virtue ethics lands him in a philosophical bind. In a lively sub-chapter entitled ‘A Handy-Dandy Menu for Building Your Own Moral Theory’, Pigliucci writes:

“In an important sense, ethics is about human well-being… so we want to know empirical facts about what increases or decreases well-being whenever we engage in ethical reasoning. Let me put this point another way: morality makes sense only within the context of a group of social animals capable of reflecting on what they are doing and why. A lion that kills another male’s cubs when he takes over a harem is not acting immorally, he is just being a lion. Similarly, even a human being could not possibly commit immoral acts if he or she were, say, permanently stranded on a deserted island, because against whom would such acts be committed?” (p.63)

‘Himself or herself’ is the answer. For instance, couldn’t it be argued that to make every effort to survive on the island is morally preferable to giving up without such an effort? Not only would both Kant and Bentham – whom Pigliucci refers to often – favor such a conclusion, but the same conclusion would be reached even if we were to opt for an amalgam of consequentialism (which says that the morality of acts depends on their consequences) and a philosophy of flourishing such as Aristotle’s virtue ethics. Bentham’s (consequentialist) utilitarian calculus surely presupposes the agent’s happiness as having weight in the calculation of what action is moral; and this must be so even on a desert island. On the other hand, there are both duty ethicists and other utilitarians such as Bernard Gert or John Stuart Mill, who argue against any moral obligations to oneself – but it is hard to see how they can argue against such obligations and remain faithful to their theories at the same time.

All told, Answers for Aristotle is a lively, impressively-argued foray into topics ranging from Kepler’s improvement of Copernicus’s heliocentric theory, to the discovery of Neptune, from Stanley Milgram’s obedience experiment, to Kantian duty ethics. The author’s grasp of these and other topics is sure, just as we might expect. After all, he is singularly qualified for such an examination, as he holds doctoral degrees in genetics, evolutionary biology, and philosophy.

Answers for Aristotle is a veritable Cook’s Tour of science, philosophy, and the curious meeting ground of the two. The best approach, as the author intended, is to sit back in a quiet hour or two and take it all in, then look back afterward to behold the vast terrain you have covered.

Ken Shouler is an associate professor of philosophy at the County College of Morris in Randolph, New Jersey.

An Introduction to Aristotle Life

The Virtues of Self-Help

Justice: What’s The Right Thing To Do? by Michael Sandel