Frank O’Carroll observes a liberating encounter in a French café.

Sartre: So you’ve heard about the little periodical me and my friends are starting?

Waiter: All Paris must have heard by now. Since the news broke, the patrons of Les Deux Magots have been asking me to give you their good wishes.

Sartre: (Smiles sardonically) I’m sure there are many who’d gladly send me their ill wishes, for having rattled their cages.

Waiter: Oh not at all monsieur. They may not agree with you at times, but they do respect you.

Sartre: Hmm! I’ve seen them all too often cross to the other side of the street from me.

Waiter: Nevertheless, why do you think we have so many visitors here? I’ll tell you why. To catch a glimpse of Jean-Paul Sartre, France’s most famous philosopher!

Sartre: Tut tut Roberto. What they glimpse is not me, but a figment of their own fabrication. Besides, there’s Camus and Merleau-Ponty. And next year there will be a new flavour of the month.

Waiter: But none like the legendary spokesman for France, for the workers, for the Resistance, for freedom! That is what they come to glimpse.

Sartre: Thank you Roberto. Now I’ll have that coffee while I’m waiting for madame to join me.

Waiter: Sure monsieur. And perhaps a little cognac on the house to celebrate?

Sartre: Just coffee will do fine.

Waiter: I insist monsieur. After all, it is a special occasion.

Sartre: Okay. But just un peu. I’ll need my wits when the reporters arrive to grill me.

(Waiter nods, disappears, then returns with tray containing a coffee and a cognac.)

Waiter: You did right, monsieur, to leave teaching. It’s energy-sapping.

Sartre: Odd as it may seem, I enjoyed it… perhaps too much. But you’re right. The work-load was punishing. Perhaps my post as Editor of Les Temps Modernes will give me more time for my philosophy.

Sartre: I’ll admit it cost me some sleepless nights. On the other hand, had I stayed put, I’d live to regret it. (Raises the brandy glass.) So, here’s to an exciting new venture.

Waiter: And to success!

(Roberto clinks a glass of water with Sartre’s cognac.)

Sartre: So what does the future hold for you, Roberto?

Waiter: The usual. Nothing very spectacular.

Sartre: And you’ve no desire to move on, to progress?

Waiter: Absolutely none. This is all I’ve ever expected.

Sartre: So will it be Les Deux Magots ’til you’re carried out feet first?

Waiter: Hopefully. When I die, let it be on my feet, here in my ancestral habitat, where, according to a Buddhist patron, I may well have been a waiter in a previous existence. 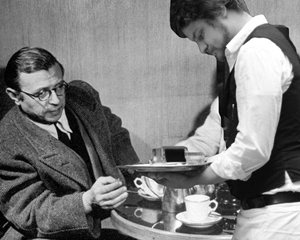 Sartre: There are worse ways of dying, admittedly. But there have to be better ways of living.

Waiter: (Shrugs, then shakes his head.) Not for me, monsieur. I live to work here as much as I work to live here.

Sartre: And you’ve never thought of doing anything else?

Waiter: Never. Waitering is in my blood!

Sartre: Really? (Smiling) When did it become infected?

Waiter: My father was a waiter, and his father before him. For me to do anything other than be a waiter would be unthinkable. It’s my destiny.

Sartre: (Frowns) Not necessarily. Maybe you do not have a destiny.

Sartre: Highly unlikely. I’d prefer to think that you simply stepped into your father’s shoes.

Waiter: And what’s so wrong about following in his footsteps?

Sartre: Figuratively speaking, his shoes are many sizes too small for you.

Waiter: (Laughs) So far I haven’t suffered any discomfort in them.

Sartre: I’d suggest you cast off those old shoes if you want to grow. You need bigger shoes, Roberto.

Waiter: I’m a waiter, not a shareholder. As for growing pains, I’ve had my share of them.

Sartre: There’s no growing without them. And if breaking the cycle of your inherited immobility means having to go barefoot till you get on your feet, then so be it.

Waiter: Barefoot! Do you want my girlfriend – soon to be my wife – to show me a clean pair of heels?

Sartre: I can’t very well see her objecting to you blazing an exciting new trail.

Waiter: So what are you proposing, Monsieur Sartre?

Sartre: To put it bluntly, you’re capable of a more creative career than waitering. It will only be a matter of time before you go to seed in this comfort zone. Bright people like you need to be intellectually challenged in order to flower.

Waiter: Merci for your concern, but am I not blossoming now?

Sartre: You’re smart Roberto. You’ve read my novels. You go to the cinema. You converse intelligently with foreigners, day-in, day-out. Being the bright boy of your class that you were, you have a duty to fulfil your talents.

Waiter: The trades – that’s where my family come from. Survival was their priority, not fulfilment. I’d much prefer to flourish in Les Deux Magots like a song bird in captivity, than risk failure as a freebooting intellectual. This is why I carry around this tray contentedly – and (smiling) also for my sins.

Waiter: But why should I not be what I am, when I’m comfortable with it? After all, I am what I do.

Sartre: You are not. You are a lot more than that.

Waiter: But you’ll agree I’m good at it.

Sartre: Much too good. In fact, that tray you carry around like the world on the shoulders of Atlas is like an extension of you. You give one the impression that if you were to drop it, the laws of gravity would collapse.

Waiter: On the other hand Monsieur Sartre, it wouldn’t do if I were to drop its contents on that expensive new dress you bought Mademoiselle de Beauvoir last week.

Sartre: However, a robot could do it as well as you, and may well do so in the future.

Waiter: Ah but Monsieur, a robot cannot chat to the people who come here to escape from their loneliness, their unrequited loves, their misadventures, the sense of loss from the death of a loved one. And there are others who feel the need to have their hunger for gossip fed by waiters like me, or to off-load their problems to a sympathetic ear. Les Deux Magots is many things to many people. Rest assured, it’s not all about carrying around trays of food to the bourgeois of Paris or to rich Americans. Besides, where else could I hope to wait upon the illustrious Monsieur and Madame night after night – and then brag about it to my friends?

Sartre: Satisfying though your vicarious life may seem to you, there’s no denying that you’re selling yourself short. In fact, I see no reason why you couldn’t be a journalist, and use your knowledge of food and café life to write a column for some Parisian paper. You have the inside story.

Sartre: Not as much as you under-rate yourself. You’ve got to be prepared to reinvent yourself from time to time. Otherwise, you’ll atrophy from routine, and, perhaps worse, you’ll be lying to yourself about who you are and who you could be.

Waiter: As long as I wake up tomorrow the same person as I am today, I’ll be happy.

Sartre: Have you forgotten, Roberto, that for us Existentialists, existence precedes essence? This means that tomorrow calls for a new self.

Waiter: (Shakes his head.) I’m afraid you’re looking at a finished product. I already have what I want: a decent job in a famous café that attracts the stunning belles of Paris, who have me dancing like Fred Astaire to their rapturous attention. Not to mention the appreciation of celebrities of the theatre and cinema, who tip me royally and give me free tickets for shows on my nights off.

Sartre: But aren’t there also those winter evenings when the tourists have gone, when things get a bit stale, when you feel the need for new pastures? If you take a leaf from my book and change your life, you might well become a celebrity yourself. Remember that I’ve taken one of the biggest gambles in my life by packing in a well-paid, highly respectable job, to edit a radical magazine.

Waiter: But that is what you’ve always wanted. And you have what it takes for the task.

Sartre: I hope so. Time will tell.

Waiter: Time will confirm that you are the man for the job, I’m certain of it.

Sartre: How about this for a suggestion for you? Suppose I start you off with a monthly column in the magazine? All going well, I can then arrange for you to write for one of the dailies.

Waiter: Will I have to give up waitering?

Sartre: Not initially. But you may be able to dispense with your tray when you eventually become a famous food critic. (Pause.) So, are you prepared to step out of your father’s shoes and have an article ready for me by the end of the month?

Waiter: I’ll think about it. I only hope the proprietor of Les Deux Magots doesn’t think I’m using the job for my own ends, should I decide to take on your offer.

Sartre: He doesn’t own you! In any case, a celebrity waiter can only be good for business. Then in time you can shake the dust of Les Deux Magots from your shoes, and tour the cafés of Europe as a writer. So, are you prepared to take a risk?

Waiter: I can give it a try. Though taking up your footloose agenda is going to put me through a huge bout of angst.

Sartre: Good. Now you’re being true to your authentic self. So, let us drink to that.

(Signals the other waiter for two more cognacs.)

Frank O’Carroll, a retired teacher, is an ongoing extramural philosophy student at Trinity College, Dublin. He has three books of short stories published, as well as some poetry.

The Existentialist Greyhound, or Jean-Paul Sartre goes to the White City (and loses all his money)