Facebook was founded on February 4, 2004, by Mark Zuckerberg and his Harvard University room-mates Eduardo Saverin, Andrew McCollum, Dustin Moskovitz and Chris Hughes. What started out as an on-campus online ‘hot or not’ tool resulted in the registration of a billion users by 2012. Its rapid growth and perpetually expanding corporate power, as well as its part in the ‘digital privacy’ controversy, has attracted many seeking to explain its remarkable popularity as well as peoples’ discontent with it. Although interesting and important, these studies focus predominantly on what users do on Facebook, leaving underexposed what Facebook does to the user.

Facebook possesses properties that can be construed not just in terms of globalized online networks, but also in terms of a type of space. In these terms, Facebook is a world within the world that attracts or repels people by its geography as much as by its social life. So what kind of space is Facebook? I claim that it’s what philosopher Michel Foucault (1926-1984) ingeniously called “un espace autre” – “an other space”; better known as a heterotopia. As I will elaborate, understanding Facebook as a heterotopic space offers a style of critical thinking that invites moral reflection on digital culture and its relation to other spaces in our everyday lives. 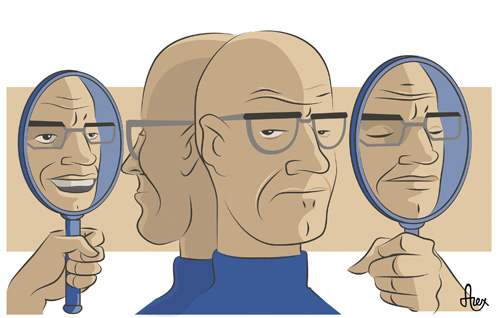 A Space of Revelation

On the one hand, Facebook is often celebrated as a space where the modern interconnected ideal is realized; while on the other hand it may be seen as another step further into a digital dystopia overwhelmed by the excesses of the information age. Can we reconcile these seemingly opposite points of view? I claim that Foucault’s notion of heterotopic spaces helps us do so.

Michel Foucault first introduced the notion of heterotopia in the preface of his 1966 book Les Mots et les Choses (translated in 1970 as The Order of Things), and further developed the concept in his famous lecture ‘Of Other Spaces’ (1967). There he says of heterotopias,

“There also exist – and this is probably true for all cultures and all civilisations – real and effective spaces which are outlined in the very institution of society, but which constitute a sort of counter-arrangement… [in which] all the other real arrangements that can be found within society, are at one and the same time represented, challenged and overturned: a sort of place that lies outside all places and yet is actually localizable.”

Heterotopias exist in defined spaces, whereas utopias are those ‘placeless’ spaces that we know are inherently unreal and unattainable. Yet heterotopias are not the opposite of utopias. Rather, like utopias, heterotopic spaces make reference to other spaces/places, and relate to them by representing them in specific ways. “Their role” Foucault said on the function of the heterotopia, “is to create a space that is other, another real space, as perfect, as meticulous, as well arranged as ours is messy, ill constructed, and jumbled.” At the same time heterotopias “suspect, neutralize, or invert the set of relations that they happen to designate, mirror, or reflect” (all quotes are from ‘Of Other Spaces’). The central points to understand are that a heterotopia always represents society, yet distorts it in such a way that it reveals a culture’s ideology.

What do I mean here exactly? Consider, as Foucault did, the Jesuit missions in South America in the Seventeenth Century. These missions for the ‘conquest of souls’ were places where human perfection was to be actualized (essentially compensating for the decay of continental Christian moral values). The Jesuit villages embodied the Christian ideal even in the shape they were built, by reproducing the Cross. Moreover, the enactment of the unquenchable desire for moral perfection went hand in hand with absolute power and regulation. So in this ‘pure’ Christian space, aspects of Catholicism were revealed that their propaganda might not have mentioned.

Another function of a heterotopia is “to create a space of illusion that exposes every real space, all the sites inside of which human life is partitioned, as still more illusory.” Isn’t Facebook such a place? Facebook’s function is best summed up by what Foucault said was typical of all heterotopias: they are “counter–sites, a kind of effectively-enacted utopia in which the real sites, all the other real sites that can be found within the culture, are simultaneously represented, contested, and inverted.” And representing the culture in a unique way is surely what Facebook does.

The Virtual in Reality 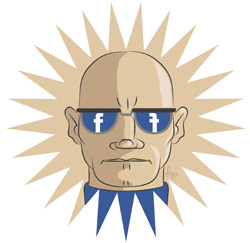 “The mirror is a placeless place,” Foucault says. “In the mirror, I see myself there where I’m not, in an unreal, virtual space that opens up behind the surface.” The mirror is a heterotopic space because it is “absolutely real, connected with all the space that surrounds it.” It fully represents the real world, although it is elsewhere. Facebook is the virtual embodiment of Foucault’s mirror metaphor. We see ourselves on the screen in a sort of image. Our profile pages always reflect ourselves back at us, while that same image of ourselves opens up a world where we are not. This is why Facebook is a heterotopia. In Foucaultian terms, Facebook is a ‘disrupting’ space which turns our usual world on its head by disturbing its ‘continuity and normality’. You exit the normal world when you log in; but still you are involved in representing a version of normal life.

Facebook exhibits many paradoxes. It isolates at the same time as it exposes: it liberates users from the constraints of distance, yet confines them to a screen. Facebook facilitates effortless instant communication across a vast number of locations, whilst sustaining the experience that we are localized. It offers a sense of increased control and oversight over social connections, while it simultaneously curtails privacy. It has the allure of being completely open, accessible and democratic – its mission statement being “Giving people the power to share and make the world more open and connected” – yet in effect it constitutes a gated community, with invisible moderators in possession of total control. That is to say, in order to prevent the sharing of ‘inappropriate’ content violating Facebook’s terms, all activity is monitored. One is essentially relieved of claims to Facebook property. These paradoxes are interesting since they may be why so many users (and non-users) feel so ambivalent about Facebook.

Facebook’s paradoxical effect on the user’s reality is perhaps most visible in the concern about ‘authenticity’ that so many (non)users report regarding Facebook. By submitting the user to a process of self-exposure to others, Facebook renders virtual social life a staged act – a performance. This is why the Facebook self is so often criticized for being highly performative.

However, as Erving Goffman argued in The Presentation of Self in Everyday Life (1959), the self is always a performance, in which individuals attempt to control the impression that others have of them. This fact is unsettling, because it means that in recognizing the way we present our lives and construct our identities on Facebook to be a performance, we then come to question our personal identity offline too. It is exactly at this juxtaposition of reality and image, where the virtual defines the real, that the heterotopia undermines the notion of ‘real’ reality, through undermining the notion of ‘real’ identity. So on the one hand Facebook opens up a new kind of space where the selection, formulation and articulation of content concerning our identity is more readily available; but on the other hand, this new-found malleability makes us question what our everyday ‘identity’ actually means.

In ‘Of Other Spaces’, Foucault explains that heterotopias call into question the reality of the ordinary spaces around them – they disturb by exposing. Facebook exposes not the increasing reality of the virtual, but rather that our reality, our identity, has been virtual all along. So while the virtual world increasingly resembles our actual world, the same process has revealed that the actual world is more virtual than we believed, in terms of how we formulate and think about our identity. Analysing Facebook as a heterotopia brings its relation to other spaces into focus. Facebook is a world in the world that provides an illusion which paradoxically exposes the real world as ‘illusory’.

Robin Rymarczuk holds a MSc in Theory & History of Psychology from the University of Groningen, Netherlands. He writes on a diverse range of topics, including media theory, critical theory, technology and the ambiguities of space.

Me, Paranoid? Who told you?

The Heterotopia of Disney World