Do our senses give us an accurate idea of the way the world is? Every day we’re confronted by masses of data about the world: sounds, smells, shapes, hues, textures. But does our sensory information amount to a picture of reality – an idea of things as they really are?

Sensing the world around us accurately and with precision must be advantageous in natural selection terms. We can see why humans and other species would have developed refined senses through the process of evolution. We might think of the gazelle who can detect their predator miles away with an acute sense of smell, and so potentially evade a sorry end; or the human, who upon recognizing the blue mould on a putrid apple, decides to eat something more pleasant and less poisonous.

Over 90% of animal species have visual processing of some kind. The first simple image-forming eye evolved between half a billion and 350 million years ago, on a sort of sea slug. Before this, life was blind. But vision as a trait is a matter of degrees: it is not a simple case of have or don’t have. Take humans, for instance. Our vision is usually trichromatic, meaning that our retinas tend to possess three kinds of colour-receptive cells, for blue, green, and red wavelength light. Those with only two types of these cells experience what we refer to as ‘colour blindness’, meaning that they can’t distinguish between, say, blue and green.

Now consider dragonflies. As well as being able to detect blue, green and red wavelength light, they can also perceive light beyond human visual capabilities, including ultraviolet light and polarised light reflecting off water. Some scientists have described dragonflies as perceiving in ultra-HD due to their possession of 30,000-plus ommatidia (the facets of an insect’s eye, which are individual photoreceptor units). Their perception of a mosaic of partially overlapping images also allows them to see in multiple directions at the same time.

Perhaps humans have a better deal than the garden snail, which cannot perceive colour at all or focus its vision; but at the same time, are we missing something when it comes to our relatively narrow perception of the light spectrum in comparison to dragonflies? Given their superior light-detecting capabilities, do dragonflies have a more realistic view of the world? 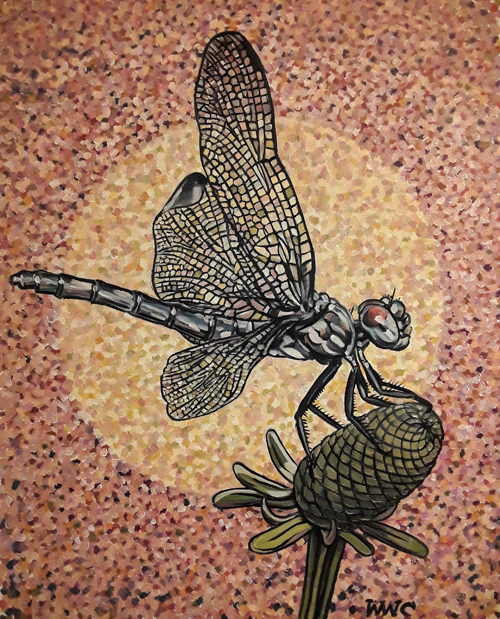 Locke rather problematically asserted that our sense data ‘resemble’ the physical objects from which they are derived. This is problematic since, according to his account, we only ever perceive sense data, not physical objects themselves. But how can he claim that one thing resembles another if he has only ever seen one of those things? It’s akin to claiming “Oh yes, Steve really looks like his uncle” without ever having seen Steve’s uncle. Claiming resemblance without familiarity with both of the things being compared is nonsensical.

There’s a further problem with Locke’s theory, again regarding his assertion that we only perceive qualities resembling objects and not the external physical objects themselves. Scepticism of not only the nature but also the very existence of the external world looms if we cannot see beyond the veil of sense data. If we only ever perceive representations, how can we know if a mind-independent world of physical objects lies beyond it? Locke’s answer is that the coherence between our senses indicates an external world lying beyond them. For instance, when making an initial judgement of an object as being ‘smooth’ after a fleeting glimpse of that object, we can use our sense of touch to corroborate the evidence provided by our eyes. Further support for the view that there is an external physical world could be gained through the similarities in experience between one human and another that can be communicated through language and aligned behaviour.

But perhaps we’re thinking about the relationship between the world and the mind in the wrong way, if we assume that we must strive to simply conform our understanding to the world. Immanuel Kant (1724-1804) argued instead that the world must conform itself to the human mind. If this claim seems peculiar, we must take a step back and identify where this line of reasoning comes from.

Copernicus (1473-1543) discovered that the solar system is heliocentric or Sun-centred and not, as previously accepted, geocentric or Earth-centred. Now of course this caused some controversy for Sixteenth Century European minds, with their Church-endorsed attachment to the focal point of the universe being the Earth. The Copernican Revolution challenged orthodoxy not just in science, but in religion too.

Kant was to formulate his own ‘Copernican Revolution’, as he himself called it; although his concern was the relationship between the external world and the human mind rather than the relationship between the Earth and the Sun. He drew a parallel with Copernicus’s revolution because instead of the external world (cf the Earth) being central in his philosophy of perception, for him the perceiving mind (cf the Sun) was central. Kant argued against the mind simply conforming itself to the external world, saying instead that the world must also conform itself to the mind perceiving it. In perceiving the world, people impose certain basic features on the raw data of their sense organs because of the human mind’s inbuilt structure. In other words, our perceptual experience is formatted by our cognitive arrangement, and anything external to us must conform to this arrangement to be perceived at all. This unfortunately means that what external objects are like in themselves can never be known.

Kant’s theorem entails that concepts (he called them ‘categories’) such as time are in-built aspects of the way our minds organise information as opposed to objective features of the world. We might say, time is inherent in the subject rather than the object. Consider a human looking at a dragonfly whizzing past. They perceive the insect as moving at a certain speed; but other species’ perception is different. For a turtle, it would appear to be moving at almost twice the speed; for many species of fly, ten times slower than for a human. This is due to animals’ brains processing their visual experiences at different speeds. For instance, brains receive images from eyes a certain number of times per second: a human brain will receive on average 24 images a second, turtles 15, and flies 250. This idea goes some way to illustrate Kant’s view of the subjectivity of time, as well as explaining why if you try to swat a fly you’re unlikely to be successful.

Further puzzles concerning whether or not our perceptual account of the world is accurate may arise from the physical processes involved in perception. For instance, light takes approximately eight minutes and twenty seconds to travel from the Sun to the Earth. This means that if the Sun suddenly ceased to exist, we would carry on with our lives in blissful ignorance for over eight minutes until the unfortunate news overshadowed us. But not only is there a time-lag between the Sun’s light reaching Earth, there’s also a time-lag in our everyday perception, since it takes time for the brain to process the information coming into our senses and create an experience of it for our minds. This means that we’re perceiving even everyday things not as they currently are but as they were milliseconds ago.

We might not be too concerned with this revelation. Does this substantively undermine the view that we perceive the world as it is? Well, perhaps milliseconds later is only a minor aberration and we may still perceive a world of external physical objects directly – just slightly delayed. However, some intriguing implications for extraterrestrial life could be more chilling. We may only be one of hundreds of advanced civilizations in the galaxy. Sadly, space being the way it is (pretty spacious), the average distance between any two of these civilizations is unlikely to be less than two hundred light years. If extraterrestrial beings have developed telescopes advanced enough to see us, they’re watching light that left Earth at least two hundred years ago. So, they’re not seeing you and I, but instead observing George Stephenson invent the steam engine, the First Mexican Empire declare its independence from the Spanish, and the world population reach one billion. Then again, the aliens may have different faculties of perception altogether…

In his paper ‘What is it Like to be a Bat?’ (1974) Thomas Nagel argues that a complete biological account of a bat’s life, in terms of their use of sonar, flying, hanging upside down in caves and so on, would not be enough for us humans to understand the subjective experience of a bat. We might try to imagine what it would be like, but that would be using a human mind rather than a bat mind to imagine it, and so already we’ve defeated the purpose.

In aiming to fathom what it’s like to be a dragonfly we may similarly fall short. Perception is subjective in nature and so not understandable in terms of the observable physical properties of the organisms involved. That goes for bats, dragonflies and aliens. So aiming to analyse consciousness objectively could well be futile due to the very subjectivity of consciousness. Our quest for understanding is all too human.

So if Kant is correct in his Copernican Revolution and the mind is foundational to how the world appears, then we might give up the gruelling task of desperately trying to grasp the way the world is in itself and settle for a reality that is, ultimately, human. This doesn’t need to be a defeating realisation. We may need to accept that the world as we know it is governed by the structure of our human minds; but awe and wonder can still be found in contemplating how other beings who share our universe perceive it, as well as in how we perceive it ourselves.

Kant and the Thing in Itself

Allegory of the Living Room

I Kid You Not: Knowingness and Other Shallows