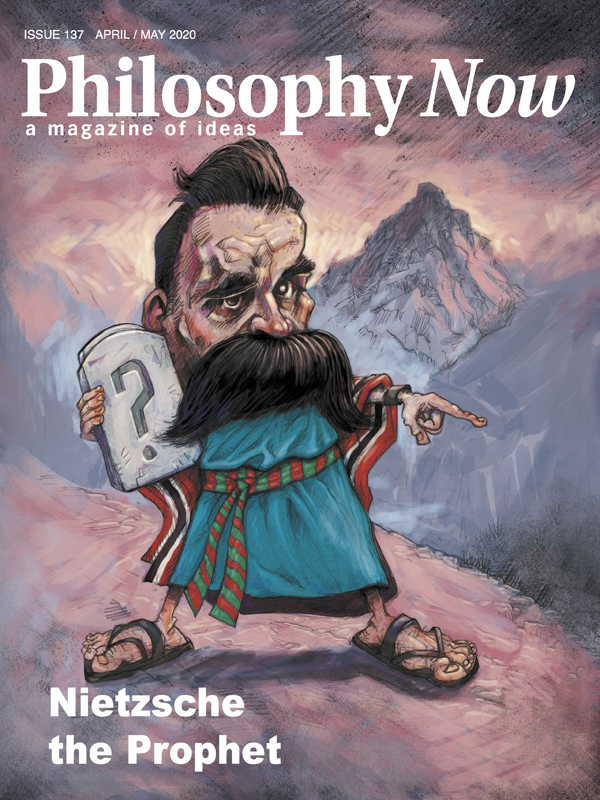 Brandon Robshaw looks again at Nietzsche’s idea of the eternal repetition of life.

‘I Am A God’: On Becoming More Than Human

To Forget or To Remember?

Paul Doolan on what Nietzsche thought we can, and can’t, get out of history.

To Infinity… and Beyond!

Owain Griffin takes a leap beyond the limits of numbers, into concepts.

Les Reid wonders whether the universe might turn out to be infinite after all.

Escaping the Academic Coal Mine

David Rönnegard argues that academia must focus on unearthing gems.

Mark Willingham looks at the philosophy of the great artist.

What & Why Are Human Rights?

Our readers give their thoughts, each winning the right to a random book.

Letters About Nothing • Climate of Change • There Are Others • Freedom & Bondage • Face Values • Modern Omniscience • Bad Thoughts? Full Marx! • Philosophy: What Is It Good For?

Peter Adamson wonders if we can learn philosophy from a life.

Against Neural Philosophy Of Mind

Raymond Tallis argues that your brain waves are not themselves thoughts.

Thorsten Botz-Bornstein writes in praise of Industry in our postindustrial morass.

Chad Trainer asks whether animals should be considered moral ‘ends in themselves’.

Chris Ferbrache wonders why zombie movies have remained so popular for almost a century.