All flows from the One,
My soul flies to Intellect
I long to return 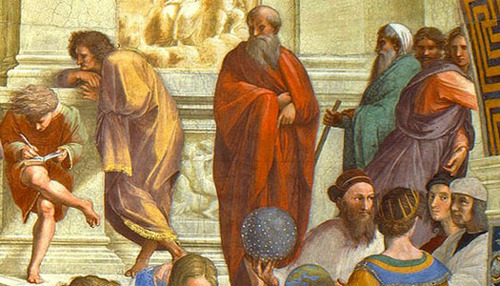 Born in Egypt, Plotinus first appears in the history books as a student in Alexandria, where he studied Greek philosophy for eleven years. Then he did a stint in the Roman army, which was to head East, his aim being to learn from Persian and Indian philosophers (presumably he anticipated being able to take time out from pillaging, killing and oppressing). He later came to Rome where he spent the rest of his life teaching, developing a system of metaphysics that would become known as Neoplatonism. In his rather toadying biography of Plotinus, his pupil Porphyry describes him as a ‘god-like man’, which is a nice way of saying he was a mystic who said mysterious, beautiful, and frequently incomprehensible things.

In short, Plotinus thought there is a hierarchy of existence, at the top of which is the One (what else would you call it?), which he likened to Plato’s Form of the Good. Below the One, there is Intelligence (what we would call intellect); and below that, Soul (which includes perception and other biological functions). By emanating its mystical powers in an overflowing of itself, like light from the sun, the One creates Intelligence and Soul, and is thus the source of all being. The One is perfect, the other facets of the world increasingly less so. Actual physical bodies, like those we live in, are so revolting and despicable as not to rate a place in the hierarchy. In its perfection the One is unknowable, but at the same time the ultimate object of desire to which our souls wish to return. Our goal in life is to achieve union with the One, which we do by becoming utterly absorbed in contemplating it. Of course, given that contemplating the unknowable isn’t easy, this might be something of a challenge. But it’s sure to be character-building.

Terence Green is a writer, historian and lecturer who lives in Paekakariki, New Zealand.

Warning: The Objects in the Photograph are not as Real as they Appear

What Sorts of Things Exist, & How?