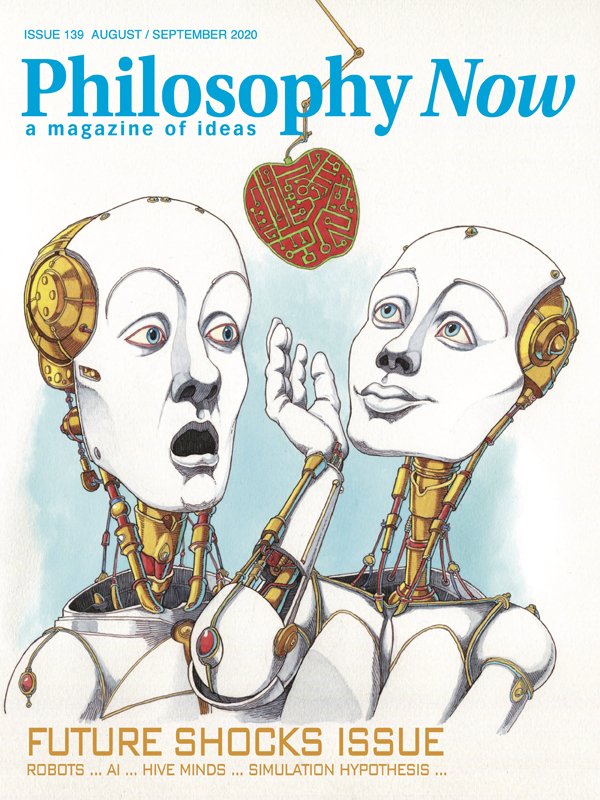 The Shock of Things to Come

Brett Wilson judges the case for laws for robots.

Virtual Reality as a Catalyst for Thought

Joakim Vindenes says VR could be a useful addition to the philosopher’s toolkit.

The Singularity of the Human Hive Mind

James Sirois gives us a strong warning about overusing the net.

The Battle for the Robot Soul

James K. Wight looks at how cultures define our views of machines.

A Survival Guide for Living in the Simulation

Harry Whitnall considers how best to react if you find out that the world isn’t real.

Frank Martela relates how science destroyed the meaning of life, but helps us find meaning in life.

Gary Browning tells us why Iris Murdoch stands out as a twentieth century thinker.

How Do We Understand Each Other?

Graham Harman is Distinguished Professor of Philosophy at the Southern California Institute of Architecture. Here he chats with Thiago Pinho about his work on the metaphysics of objects, which led to the development of Object Oriented Ontology.

Beyond Belief • Genocide in Poland • Our Nietzschean Selves • Beyond Mathematics • The New Minimalism • Mind: The Gap • Imagine There’s a God • Your Secret is the Truth

Back to the Future

Peter Adamson looks back at ideas of eternal repetition.

Philosophy in the Time of Plague, Part 2

Raymond Tallis ruminates on the reckoning and the reconstruction required.

We get existential as Doug Phillips says you have to keep punching until the final bell.

Philosopher of the Heart: The Restless Life of Søren Kierkegaard by Clare Carlisle

Terri Murray gets to the core of ethics with Socrates and Woody Allen [CONTAINS PLOT SPOILERS!].

What Colour Are Numbers?

Keith McVeigh contacts an advanced alien with a strange (non-)question.