Throughout the last decade, social protest movements have filled our TV screens and newsfeeds. From Occupy and the Arab Spring, to the Yellow Vests, Extinction Rebellion, the Women’s Marches and Black Lives Matter, people power is as alive as ever.

Sadly, it also remains as controversial as ever, as the media furore over the toppling of statues in the US and UK has shown. This highlights the poor appreciation by many commentators of what drives social protest. If we want mature responses to social movements, we must first consider the points-of-view of those doing the protesting.

A philosophical account of social movements that does just this is Axel Honneth’s ‘recognition theory’, originally developed in the 1990s. Honneth (b.1949), a German social philosopher, was reacting against a previously academically-dominant Marxist explanation for social conflict, which reduced the agency of protestors by claiming that their activism was predetermined by economic and social factors. Honneth sought a new theory that gave proper agency to individuals, recognising their feelings and hopes. To do this, he turned to an eighteenth century concept from GWF Hegel (who had in turn been inspired by Fichte) known as ‘mutual recognition’. Fichte and Hegel held that a condition of increasing human self-consciousness is that we mutually recognise each other as free. The theory says that we can only truly become free ourselves if we recognise others as free, and have them so recognise us back.

Honneth saw in this idea the potential for a new account of social movements. But first, to scientifically back up Hegel’s analysis, he used George Herbert Mead’s psychology. Mead’s studies of children had led him to conclude that an infant gains a good practical understanding of itself only through interaction with others. Honneth used this psychological insight to update Hegel’s philosophical concept of mutual recognition, and so create a theory of social movements that restored the importance of the individuals involved.

He first did this in his 1992 book The Struggle for Recognition: The Moral Grammar of Social Conflicts. In it he details three forms of recognition that can be bestowed upon someone, and three corresponding values or attributes this recognition from others allows people to recognise in themselves. These are (i) ‘Love’ – arising originally in your family and providing basic existential self-confidence; (ii) ‘Legal recognition’ – granted by the state and its legal system, and giving you self-respect insofar as you are an equal participant in the legal process; and (iii) ‘Solidarity’ – the type of self-esteem which comes from seeing yourself as socially valuable. He believes that realisation of all three forms of social recognition are necessary for true freedom. In Honneth’s account, being denied recognition in any of these ways – for example, being excluded from the legal system, or being denigrated as socially worthless – is the source of motivation for social struggle. The feeling of individual disrespect this denial provokes disrupts your expectations, which are based on previous experiences of either your own or others’ recognition. The impetus for a social movement arises when a particular type of disrespect starts being perceived as being shared by a group. This in turn leads to a shared concept of what a future society that delivered recognition would look like, and the gap between this ideal and reality fuels social protest. To Honneth this would be the underpinnings of a movement such as the Women’s March or Black Lives Matter. 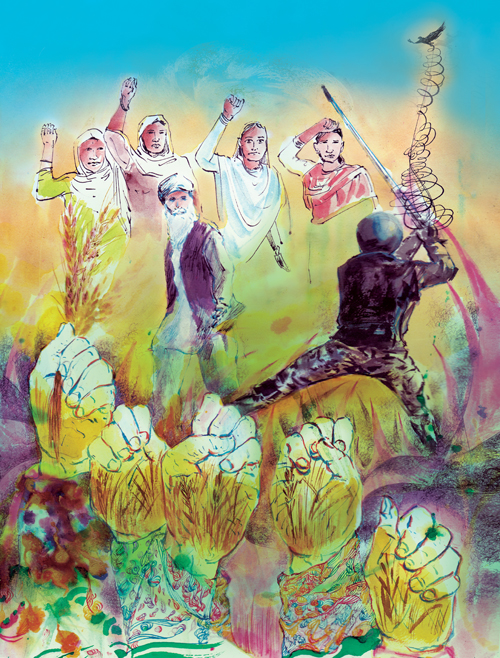 The strength of Honneth’s recognition theory is the role it gives to those actually involved in social struggles. No longer are their actions seen as necessitated by economic or social conditions, but instead as arising from their own experiences and feelings.

Nowhere is Honneth’s concern for the agency of protestors clearer than in his refusal to define their goals for them. This follows from his philosophy. What constitutes a society that truly provides recognition is inherently ambiguous in his theory, since the qualities, traits, and lifestyles deemed socially valuable or necessary to be included in the legal system are open to constant, and conflicting, reinterpretation. Indeed, for Honneth, social groups will clash as they each attempt to establish their own conception of a good future as the norm. But this implies that social groups that are engaged in protest must define their own shared concept of what a world that brings proper social recognition consists of. It is not for a philosopher, or a media pundit, to tell them. So instead of patronisingly instructing people in what the good society would look like, we must leave it to those struggling for recognition to define their own ends – so long as they don’t wish to deny recognition to anybody else. Presumably, this is why Honneth himself has always shied away from specific political interventions.

Honneth’s recognition theory is not perfect. The pretence of it being grounded in science is shaky, and it lacks an account of how institutions, in contrast to individuals, also provide or deny recognition – arguably a crucial element of any recognition theory for dissecting systematic prejudice. It’s also hard to make recognition theory fit protests that span myriad otherwise conflicting groups – such as those united against authoritarian leaders.

However, Honneth reminds us to always put those affected and protesting first. This is a crucial and timely lesson. Donald Trump described the Black Lives Matter movement as ‘a symbol of hate’. In Britain as in the US, politicians and media too quickly reach for the tropes of ‘hooliganism’ and ‘thuggery’ when discussing those engaged in social struggle. And many of us who consider ourselves ‘woke’ nevertheless all-too-easily fall into critiquing the demands of protesters.

Perhaps if we had a better shared appreciation of what drives social movements, and gave primacy to those individuals at their hearts, we would be better able to act on valid demands for meaningful social change and recognition. In 2021, we need this shared account that avoids patronising those who take a stand more than ever.

Andrew Hyams is a political campaigns consultant. He holds an MA in the History of Political Thought and Intellectual History from UCL and Queen Mary, University of London.

America The Philosophical by Carlin Romano

Is Religion Bad For Society?