On the way to meet my research supervisor at Cambridge University I photographed this idyllic scene. The captain of the punt (gondolier? punter?) was boasting to his international passengers that a single college in Cambridge had produced more Nobel Prize-winners than all of the Oxford colleges put together. I suspect that he was exaggerating, but according to the Times, Cambridge has had 121 Nobel laureates, which is “more than the total for either Germany or France.” (Emma Duncan, 9 July 2021) 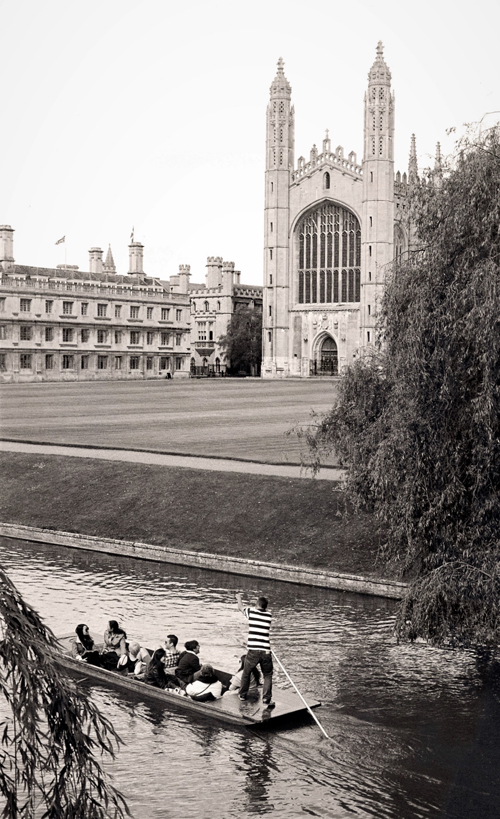 Although that young upstart, Harvard, is currently ahead in the Nobel Prize stakes, Cambridge is certainly a formidable knowledge-production centre. It has accommodated such luminaries as Charles Darwin, Bertrand Russell, Ludwig Wittgenstein, and Iris Murdoch. But engaging with the kind of abstract conceptual knowledge that brought those folks worldwide fame is not the only way to open a window on reality. There are other ways of knowing than trading in ‘propositional knowledge’ – sometimes known in colloquial speech as book larnin’ (as in “The mountain clergy, as a general rule, are hostile to book larnin’, for there ain’t no Holy Ghost in it.” Smoky Mountain Voices: A Lexicon of Southern Appalachian Speech, Farwell et al, 1993). Making sense of the world, and of our part in it, is a lifelong mission. It is no easy task and requires more than book larnin’, valuable as that can be. The Pensées (thoughts) of the late British philosopher Bryan Magee were recently published for the first time in New Statesman magazine (July 2021), and Magee’s thoughts on this topic seem correct:

“Man is like a chimpanzee holding a Ming vase and looking at it in wonderment, baffled. The vase is life. And there is no possible way the chimpanzee is going to understand it” (Pensée 140).

To access even a small part of reality effectively, we baffled chimps need to experience the school of hard knocks as well as the school of hard books. Sometimes, knowledge can come to us unbidden and unexpected, in the form of a sudden realisation: an epiphany. But there are those who put all of their faith in one method of engaging with reality. Richard Lewontin, the Harvard biologist, asserted that: “the problem is to get them [the public] to reject irrational and supernatural explanations of the world, the demons that exist only in their imaginations, and to accept a social and intellectual apparatus, Science, as the only begetter of truth.” (Quoted in Finding Darwin’s God by Kenneth Miller, 1999)

Having recently died – at the age of 92 – Lewontin may have changed his opinions (or maybe not). I too have great respect for the methods and provisional findings of the sciences, but feel that there are other legitimate ways of knowing about the world. Science over-reaches itself when it claims exclusive access to the truth.

My photograph illustrates some of these other techniques for encountering reality. The college in the background deals largely with book larnin’ – propositional knowledge – which the British philosopher Gilbert Ryle called ‘knowing that’ (‘Knowing How and Knowing That’, Proceedings of the Aristotelian Society, 1946). It can be expressed in propositions like: “A spandrel is an architectural feature, consisting of an approximately triangular shape formed above and either side of an arch.”

The punter uses a different type of knowledge – one that is more grounded, embodied, and derived from physical practice. His muscles know how to balance on the punt and how to handle the sixteen foot (4.9m) pole with grace. As Jerome K. Jerome put it in Three Men in a Boat (1889), “Punting is not as easy as it looks. As in rowing, you soon learn how to get along and handle the craft, but it takes long practice before you can do this with dignity and without getting the water all up your sleeve.”

Ryle called this latter variety of knowledge ‘knowing how’. It cannot be reduced to ‘knowing that’. For example, a physics undergraduate, with an excellent grasp of the propositions of Newton (another former Cambridge student and don), would not necessarily make a good punter, even though Newtonian physics underlies the practice of punting. It’s the difference between ‘talking the talk’ and ‘walking the walk’, or in this case, ‘punting the punt’.

We can divide Ryle’s category further, into ‘knowing how’ and ‘being able to’. A clapped-out former punter, no longer able to cope with, say, the balance required, has the know-how but not the ability. He or she could make an effective punting coach, but be unable to personally punt anymore. I say ‘could’, because the practice of coaching also depends on knowing how to coach. Not all of those with punting know-how also have coaching know-how.

A third type of knowledge – and another which Lewontin would have rejected before he died – is to be found in the magnificent Chapel of King’s College Cambridge, the tallest building in my photograph. But here we need to tread carefully, for just as Lewontin locates himself at one extreme by genuflecting to science as the sole purveyor of truth, there are those (such as ‘Jonathan Black’) who are at the other extreme and who believe in some supernatural absurdities. One writer is too hostile to spiritual talk, and the other is too eager to accept any old woo-woo.

If you go into Evensong at the chapel of King’s College Cambridge as an atheist, you might emerge as a believer. The soaring architecture and angelic voices reach the parts that mere propositions and physical know-how can’t touch. You may experience a tingling in your tear-ducts; the hairs on the back of your neck could rise; you might feel an exquisite shiver down your spine. (Tip: if the queues are too long for King’s College, you could stroll up the road to St John’s College and have the same delicious experience. The choir there has performed daily services in the Chapel since the 1670s, and they’ve now got the hang of it). One explanation is that we have an innate ability to experience the divine – a sensus divinitatis – and this is triggered by the inspired music of Bach and the beatific singing of Psalms. As Magee put it in another of his Pensées (41), “Great music is valid metaphysics.” But can we trust such epiphanies?

Jonathan Black quotes a contemporary of Bach as saying “When Bach plays the organ, even God comes to Mass” (The Secret History of the World, 2010). Although this supports my point about the effects of music, Black’s proposition is theologically untenable and historically dubious, so we should reject it: God is traditionally described as omnipresent, so would be at Mass anyway, whether or not Bach was performing. John Sedgwick had already denied that such a quotation could even have been uttered in Bach’s time: “It is a remark that could have been conceived only in a modern mind. To the Gothic mind it would have been ludicrously impious, and to Bach himself it would have been offensive at the very least” (Rhythms of Western Art, 1972). I don’t want to hurt Black’s feelings, but in a published book that has presumably gone through some sort of editing process, widespread dodgy spelling is a red flag. Black spelled ‘pyrrhic’ as ‘phyrric’ and mixed up ‘hoards’ and ‘hordes’. Such slips are not enough to undermine the book’s trustworthiness completely; but he also uncritically judged an account of turning base metals into gold as being ‘detailed and credible’, and claimed that “the twentieth century German mystic and miracle worker Therese Neumann lived for some forty years on nothing more than the daily consumption of a consecrated wafer” without any exploration of the possibility of fraud or mental illness. Black – not his real name – is an Oxford graduate.

From the Sublime to the Scientistic

But what of the other extreme: the advocates of scientism who give no credence to any spiritual knowledge of reality? Where do they say that our sensus divinitatis (if we have one) comes from?

Lewontin has argued that many Darwinian adaptations, including a sense of the spiritual, are ‘spandrels’. In his splendidly-named paper ‘The Spandrels of San Marco and the Panglossian Paradigm’ (Proceedings of the Royal Society B, 1979), written with Stephen Jay Gould, he discussed the spandrels on the arches of St Mark’s Basilica in Venice and the spaces formed in the fan-vaulted ceiling of King’s College Cambridge Chapel. In both cases, these architectural necessities are decorated – by symbols of the four evangelists in Venice, and by the Tudor heraldic signs of the rose and portcullis in Cambridge. His metaphor is intended to separate desirable adaptations (such as the ability to sense the presence of something watching us) from merely ‘decorative’ features, including spiritual awareness. It had survival value in the Pleistocene landscape for early humans to interpret a rustling in the bushes as a creature with dangerous motives. But, to Lewontin, construing such rustling as showing a divine presence was only a useless decorated spandrel – smuggled in alongside the useful adaptation.

There is some empirical evidence for Lewontin’s view. Persinger and Cook (1997), for example, used a technique called transcranial magnetic stimulation to induce spiritual-type experiences in human subjects, by applying rotating magnetic fields of about 1 microTesla to the temporal lobes of the brain. The procedure appeared to stimulate a sense of a divine presence. But this artificially induced sensus divinitatis is not evidence that God doesn’t exist. If the complete works of Plato fell from my bookshelf and hit me on the head, I might see stars, but this would not indicate that real stars don’t exist.

Somewhere between cynical closed-mindedness and naïve credulity is a happy medium for accessing knowledge of reality, including spiritual, aesthetic and intuitional knowledge. As for the extremes represented by Lewontin and Black, we shouldn’t touch them with a sixteen-foot pole.

Seán Moran teaches postgraduate students in Ireland, and is professor of philosophy at one of the oldest universities in the Punjab.

What is it to be a Human Knower?

The Edge of Knowledge

The Gettier Problem No Longer a Problem