Organicity: Entropy or Evolution (2019) is a searching diagnosis of how we became mired in environmental crisis, and a passionate demand for change which takes heed of the mistakes of the past. Anarchist, architect, philosopher, and environmentalist David Dobereiner weaves together his commitments in a book that resists classification. In dialogue, interview, manifesto, letters, and philosophical analysis, it is by turns political, psychological, historical, economical, autobiographical. The reader will find Gilles Deleuze, Jane Goodall, and Vandana Shiva together on one page.

Dobereiner’s concept of ‘organicity’ is the central thread of the book. It emerged from his ecological urban design work as an architect. He sees the world as at a critical stage in a conflict between economic and ecologic thinking, each seeing the other as external to it, with the former inflicting massive damage on the latter. These negative consequences were unintended, and, he argues, followed from the dualistic thinking of René Descartes. Descartes’ description of everything outside of the mind – everything physical, including animals – as a mechanism, fuels our tendency to separate us from nature, dominate it, and use it for our own ends. We “mistook the world for something apart from ourselves, instead of understanding ourselves as a part of the natural order.” 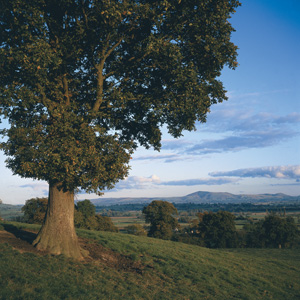 A Treetise on the Environment

Over the course of time, mind and God have generally been pushed out of the picture. Mechanistic thinking became dominant. Scientific laws were assumed to be capable of fully explaining the universe. And with the Industrial Revolution, machines came more and more to dominate life, as well as heralding the fateful turn to fossil fuel usage. Dobereiner coins the term ‘machinic’ to capture this thinking and practice. It is instrumental thinking, solely in the interests of our own species, and, of course, it is hugely successful in the material benefits it brings. But it is blinkered in its outlook, treating everything machinicially, unable to comprehend life and living systems as they are. “Machinic is not the same as the modern. It is that part of technology that is life-negating in its effect.” Yet the “march of mechanised progress seemed to be leading us to a utopia and now we are told, on the contrary, we are headed for a cliff.” Although for Dobereiner the Industrial Revolution was in a sense a step backward, because we moved away from arguably more natural sources of energy, he isn’t a Luddite, and does not advocate a return to some bucolic past.

The other principal source of our present problems is to be found in our understanding of human nature as primarily competitive and selfish. This is a warped interpretation of Darwin. But this false understanding of nature and human nature was ‘tragically misapplied’ to the economy and society. The free market and individualism work together in promoting competition, creating waste, and weakening the bonds of society. Dobereiner, following Kropotkin, instead stresses the importance of mutual aid and collaboration in evolution.

From Descartes and Darwin, then, our institutions and economic system, our attitude to other living things, our way of life, has become overly machinic and ‘disruptive of the organic’. We have strayed from nature. How do we address these problems?

The answer for Dobereiner, put simply, is to restore the balance between dominance and mutual aid, between competition and cooperation: “Organicity is a harmonising of the Organic and the Machinic.” For the author, a return to nature brings moral benefits in redressing the dominance of man over nature, and involves a revaluation of other animals that will enable us to treat them as ends in themselves. Such ideas have recently been popularised in ‘green new deals’, for example, with which the book chimes well. But more than this, Dobereiner envisions an entirely alternative way of life. His social, political and economic solutions are fused together in his grand vision of the ideal city – the Organicity, or Matripolis.

In short, the Matripolis is a reinvention of terraced housing in a pedestrian enclave: it envisions literal terraces, stepped back up a slope, on which rows of houses are arrayed with walkways connecting all residents to common spaces. The terraces are curved around a central plaza, and the house façades inflect towards each other, encouraging interaction. There would be one such structure per five hundred people or so, and they would be networked together. Motor traffic would be streamed outside these structures. But the Matripolis is as much a social structure as a physical one. Dobereiner is talking about not only urban planning, but a restructuring of society, politics, and economy.

Politically, each community would be entirely self-regulated and self-governed, as this is our natural condition once freed from “entanglement in Machinic institutions”. The communities would operate by direct democracy and assembly to bring about social change for the benefit of all. Developing John Stuart Mill’s libertarianism, Dobereiner advocates an anarcho-syndicalism or anarcho-communism. Anarchists trust people to behave in socially responsible ways given the chance: they are “communists who won’t wait for the state.” He crucially adds to anarcho-communism, “consideration, love and compassion for other lives and living systems we share the planet with.”

Economically, we would mostly work within own community. At large, we would “institute cultures of sharing and mutual aid which will largely replace the market economy of waste and addiction.” Kropotkin argued that human institutions based on cooperative principles had always been associated historically with the most creative periods, such as the Greek polis and mediaeval guild system. And like Mill, Dobereiner advocates a stationary or steady state economy where capital and wealth don’t grow. Instead of economic growth being our ideal, our goal should be cultural, moral, and spiritual growth. In this context he quotes the historian Arnold Toynbee: “Nature is going to compel posterity to revert to a stable state on the material plane and to turn to the realm of the spirit for satisfying man’s hunger for infinity” (The Observer, 1972).

Socially, we would be brought back into a more natural association with our fellows: “In the long run (if there is a long run), people will come together where they live, to share and enjoy each other’s company in the presence of other nature in all its neglected variety and complexity. Only then will the economic system be fully transformed in the direction of sustainability.” We would moreover be happier in the company of others, and it would provide “an escape from loneliness and alienation so widespread in our consumerist culture.” We know we have gone wrong, but our current ways of life hamper us from changing. As Dobereiner writes, what we must do, in short, is to “phase out fossil fuels then restructure society, its institutions and urban containers for long term steady state.”

This is a fascinating picture of a way of life which seeks to enable the changes required to establish a sustainable economy where we social animals can cooperate in a spirit of mutual aid in a suitable social space.

Alan Shepherd is a University of Glasgow philosophy graduate and freelance writer living in Newcastle-upon-Tyne.

Whose Environment Is It?

How to be Car-Free

Cars on the Carpet