Elizabeth Laidlaw explores some parallels between a modern picture of the brain and Plato’s description of the psyche.

Developments in neurobiology reveal a picture of the brain with many parallels to Plato’s description of the psyche. Given that Plato’s moral theory is built on his description of the psyche, let’s explore what insight this analogy might provide for developing a moral theory based on our knowledge of the brain. How might this help philosophers to reach agreement about specific moral issues? For example, how ought we to assess the morality of a fourteen-year-old choosing to have a baby or a fifteen-year-old teen shooting a police officer in the back? 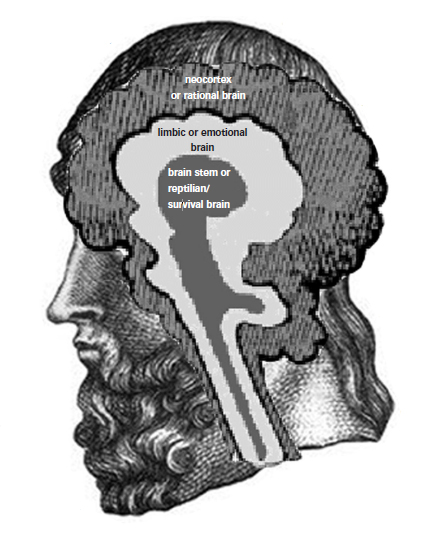 The triune brain consists of three brain structures nestled within each other (see figure). The innermost part, the first to have evolved, is the survival brain, alternatively referred to as the reptilian brain or the brain stem. This controls essential functions of breathing and reproduction, as well as other reflexive, instinctual functions. The middle, limbic brain, or the emotional brain, evolved after the reptilian brain, but before the neocortex. It sorts incoming information as pleasurable or painful (or alternatively, as promising or threatening). Emotion originates in this part of the brain, and its purpose is to compel us to act. As we grow, the third part, the rational brain, or the neocortex, takes on the job of managing the emotion-laden brain activity. This part of the brain plans, weighs alternatives, makes decisions, and regulates emotional impulses. It is the only part of the brain that produces an awareness of the other two parts, and of itself. According to neuroscience, babies are born with fairly well-developed reptilian (survival) and emotional brains, but the rational brain takes years to fully develop, physically and functionally. Psychologists tell us that this feature of brain growth helps explain young people’s lack of ability to adequately regulate emotion and weigh alternatives, leading to impulsiveness (see for instance Harry Chugani, ‘A Critical Period of Brain Development’, Preventive Medicine 27, 1998).

The three parts of the brain are in communication with each other – sometimes. Howard Bath says that the highway from the survival and emotional brains to the rational brain develops much earlier than the path from the rational part to the emotional and survival parts. For our first two decades of life, therefore, the survival and emotional brains are calling most of the shots, most of the time. To mature, the emotional and rational parts of the brain require development of their neural highways. This development comes from interacting with other brains – other people. So, even at this very basic level, we need each other. More specifically, the interaction is most needed when we are young, while our brains are developing. Thus Bath advises: “A large part of the task of parents, teachers, counselors, and mentors is to help youth finish wiring their brains. The most powerful effect on positive brain development comes from connections with positive, caring adults and peers” (Howard Bath, ‘Our Amazing Brains’, Reclaiming Children and Youth 14.3, 2005).

Continuous and positive interaction during the first year and a half of life is critical to moral development, since early experiences program us to react to our environment in predictable ways. If our early relationships are negative, we develop neural pathways that lead us toward unsociable, sometimes violent actions – a.k.a. ‘adaptively generated primitive actions’. If we have no early relationships, our brains literally won’t grow the neurons necessary for us to relate to the social world.

Louis Cozolino observes about adults who were abused as children: “the brains of these children have been shaped to survive, but are ill-equipped to negotiate the peace” (‘It’s a Jungle in There’, Louis Cozolino, Psychotherapy Networker, Sept/Oct 2008). He argues that one needs the expertise of a psychotherapist to help the survivor’s capacity for self-awareness emerge in the rational brain, and to further develop the pathways of communication with, and begin to mediate the impulses from, the other two parts of the brain. Success may be thwarted by the body’s own biology here, since the unconscious impulses from the survival and emotional aspects of the brain arrive at a rate six times greater than the rational brain can process.

Cozolino continues, “We can help our clients become more consciously clear-sighted about themselves by helping them become aware of the unconscious, irrational impulses arising from the older regions of the brain.” Reading Cozolino’s words here brought to my mind Socrates’ idea of purging falsehood from a person’s thinking to prepare them to apprehend the Forms. I began to ponder how closely the triune map of the brain and Cozolino’s prescription matched up with the concept of the soul and the moral theory emerging from Plato’s Republic.

Plato’s Conception of the Soul and the Triune Brain

In the Republic the psyche (mind or soul) of a person is described in terms of function. Socrates describes the psyche as having three parts: reason, spirit and appetite, for which he employs the metaphor of reason being a charioteer guiding the chariot of the psyche as it is being pulled by two horses, spirit and appetite (or will and desire). The function of the rational part is to be wise, that is to rule with insight on behalf of the entire soul. The courageous or high-spirited protective part is subject to, but an ally of, the rational part. The appetitive part is ruled over by the other two. Compare this concept with the concept of the triune brain. The ‘reason’ part of the Platonic psyche can be said to be equivalent to the rational brain, the neocortex; the ‘spirited’ part of the psyche with the emotional brain, or limbic system; and the basic, ‘appetitive’ part of the mind, with the survival or reptilian part of the brain. You might agree that the analogy makes a close fit.

Louis Cozolino argues for the importance of the triune brain model for the successful psychotherapist. Similarly to how Plato analyses the soul, Cozolino describes the three brains as having ‘distinctive manners’ and ‘unique agendas’, sometimes in conflict with one another. Executive decisions are made at each level, and these decisions often oppose one another. For example, the rational part of the brain may reason to stop smoking, while the emotional part of the brain desires to continue puffing away.

The moral theory emerging from the Republic is that a person ought to aspire to know the Forms of things like Justice, Beauty, Good(ness), etc so that she can use this knowledge to order herself justly. Yet the Republic’s Cave metaphor suggests that only in certain circumstances can we get through a sort of epistemic cloudiness to see the Forms (Republic 63) [see Allegory of the Cave – Ed]. The lesson from the Cave allegory is that a person must be educated to be unshackled from her false beliefs, so that she may be receptive to the abstractions of the Forms. Having apprehended the form of the Good, she reasons her way back into the cave, this time armed with the knowledge of the Forms, or as we might say, a knowledge of ultimate truth. Much is at stake here: Plato thinks that the destruction of his hypothetical Republic will be a consequence of people acting on unjustified false beliefs, for example that wealth or honor matter more than anything else. Education tries to overturn false beliefs. Unfortunately, thinks Plato, most adults are not sufficiently advanced intellectually to go on to acquire true or ultimate knowledge, which is knowledge of the Forms. On Plato’s view, only with knowledge of the Forms can the educators of the Republic properly encourage recollection and the purging of false beliefs in the people. Furthermore, to survive, the Republic must also produce a philosopher king, whose knowledge of the Forms means he can rule with wisdom through a knowledge of the higher (or deeper) truth.

Now the survival brain is very potent: it controls most bodily actions, and can allow independent survival from birth; but the emotional and rational brain thrive “only if they are successful in early relationships” (ibid). If those early relationships inhibit or misdirect brain growth, it takes the skill of a seasoned psychotherapist to safely readjust the rational brain’s ability to moderate the illogical, deeply-seated survival strategies originating from the primitive and emotional brains. The curse of teens resolving their differences with bullets and blades is often rooted in these deeply-imbedded illogical survival patterns. Hence if enlightened by recent findings of neuroscience, Plato would perhaps instead admonish us to develop quality relationships with children during infancy and early childhood, in order to promote their development of the faculty of reason. The ability to reason well is necessary to judging well, and so is necessary for the appointment of good guardians and philosopher-kings. And in addition to requiring nurturing during early childhood in this way, and afterwards the grooming of one’s soul until it is well-ordered, Plato’s third mandate would be to establish a well-funded mental health care system – for the care of the soul, as he might say.

Perhaps the most obvious philosophical objection to these brain-based conclusions is that, in using neuroscience to guide ethics, this Neuro-Moral Theory commits the naturalistic fallacy. Can our survival instincts and our need to thrive tell us what we morally ought to do? The debate over whether or not it is a fallacy to derive conclusions about how the world ought to be solely from factual claims about how the world is began with David Hume three centuries ago. Hume warned of the logical difficulty of this move, pointing out that nothing can appear in the conclusion of an argument which does not appear in its premises. So is it logically possible to deduce how we ought to raise and judge children from the experimental results of neuroscience? Yes, it is. The Neuro-Moral Theory takes seriously the constraints of human biology and, rather than committing the fallacy of deriving what we ought to do from what is the case, is supported by the philosophical wisdom that ‘ought implies can’. That is, what we are morally obligated to do must be within our grasp. What I’m suggesting is that we use the lessons of neuroscience to guide our decisions about the education of children, and about our moral assessment of them. Like Plato I am suggesting that being moral requires good thinking, which (unlike Plato) I say requires good brain development.

Elizabeth Laidlaw is the author of Plato’s Epistemology: How Hard Is It To Know? (Peter Lang Publishing, 1996). She is Associate Professor of Philosophy at Monroe Community College in Rochester, New York.

What is a Thought Experiment, Anyhow?

The Unreasonable Ineffectiveness of Philosophy