Raymond Tallis tries to fit everything in, in time.

One of the privileges of having a regular column is the joy of sharing my current philosophical preoccupations with, and testing my ideas against, the excellent readership of Philosophy Now. In Issue 121’s Letters, there was a thought-provoking critique of something I had said during the course of the interview Grant Bartley had with me in Issue 120 on my new tome on time, Of Time and Lamentation: Reflections on Transience. The letter – ‘Change Now!’ by Peter Jones – raised questions not only about time but also about the nature of philosophy, and indeed of knowledge. 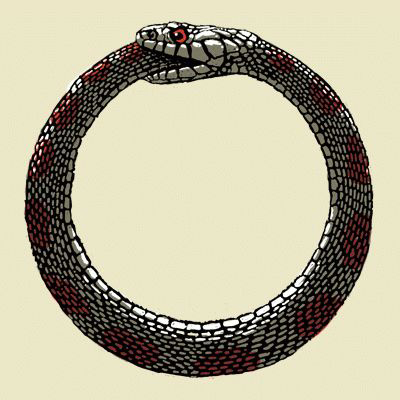 The Ouroboros: The snake of time swallowing its own tail. An ancient symbol of the cycle of nature’s creation and destruction.

In the interview, I had discussed subjective (phenomenal) and objective (cosmological) time; specifically, the question of which was the more fundamental. If we define time as, say, ‘our perception of the sequence of events’, then we seem to be suggesting that time is internal to consciousness. It would follow that, in the absence of perceivers, there would be no such thing as time. As has often been pointed out – most notably by Quentin Meillassoux in After Finitude (2008) – this would make it difficult to deal with certain very large and seemingly well-established scientific facts. If the mind-free world were timeless, what would we make of the increasingly strong scientific evidence of events taking place in a definite temporal order prior to the emergence of minds? Most of us accept some or all of the following: that there was life on Earth before there was conscious life on Earth; that the Earth existed for billions of years before life appeared on it; that the Solar System came into being before the Earth was formed; and that there was a sequence of events prior to the Solar System being formed which can be traced back to a putative Big Bang. It is not only an empirical fact that these pre-consciousness events – which Meillassoux calls ‘ancestrals’ – occurred in, and occupied, time; but (to make a point that Meillassoux does not make) it would seem to be a logical necessity that they should occur in a certain order. The Solar System cannot form before the Big Bang created something from which it could be formed; the Earth could not arise out of a Solar System that had not yet come into being; life could not arise on Earth before conditions such as those of temperature and hydration enabled certain molecules to arise and then develop into organisms; the emergence of sentient life presupposed the existence of life; and finally, mind of the kind that could entertain ideas about time could not arise except out of sentient organisms. To deny the mind-independent reality of this temporal order would be to remove any basis for adjudicating between mythological and astrophysical stories of the evolving universe, or between Darwinism and Bible-inspired Young Earth Creationism, according to which the universe is only a few thousand years old.

In his letter – which contained sufficient material to provoke a dozen columns – Peter Jones argued that I was giving too much credit to science. There are many other world pictures, according to which time is indeed a mental phenomenon and ‘the only time is Now’ – the so-called ‘Perennial’ view.

In my defence, I would point out that ‘Now’ gets a large share of the action in Of Time and Lamentation. However, this is less relevant than the argument I make in the book that the temporal relations of ‘before’ and ‘after’ are clearly not independent of consciousness. Being ‘before’ everything that followed it is not a constitutive property of the Big Bang itself, independent of conscious awareness of it being ‘before’. Similarily, being ‘after bacteria’ is not an intrinsic characteristic of, say, the first lug-worm, any more than having been written after the Battle of Hastings is a characteristic intrinsic to the sentence you are now reading. Temporal relations are relations between relata, external to the relata themselves, and they have to be made by someone.

My conclusion was therefore that neither subjective nor objective time could lay claim to priority. The subjective experience of temporal sequences (and of duration) gives rise to objective measures of time, which in turn locate subjective time as a comparatively short episode within time itself. This relationship between the temporal order into which we are born and the temporal order that is born in us is (to put it mildly) rather challenging. I discuss this in Of Time and Lamentation not least because it opens on to more general questions about the nature of philosophical inquiry not only into time, but into other fundamental aspects of the universe.

The way that objective and subjective time seem to contain each other illustrates a concept put into circulation by the American philosopher Willard van Orman Quine (1908-2000), whose lifetime’s ambition was to develop an entirely naturalistic account of the world, of ourselves in it, and (most relevant to our present inquiry) of our knowledge of it. The concept in question is that of ‘reciprocal containment’, in which A contains B and B contains A.

Quine’s idea is not at all straightforward, but it is worth wrestling with, as it bears on the question of where philosophy should begin – what should count as what René Descartes called ‘First Philosophy’. It is encapsulated succinctly by Burton Dreben, Quine’s colleague at Harvard:

Enclosing the world from a vantage point

If this seems circular, this is because it is circular. Quine accepted that this circularity must be inescapable because, as Dreben puts it, he believed that naturalism means that “there is no Archimedean point from which we can justify knowledge as a whole.” Philosophy cannot rise above the cognitive realm to see, understand, and judge that realm from the outside. There could not therefore be a distinctly philosophical approach to knowledge. Epistemology – the nature of inquiry into knowledge, including its basis, validity, and limits – should be instead contained in the natural sciences, as a chapter of the psychology of the human primate.

I disagree with Quine. Epistemology must surely be upstream of any specific empirical inquiry. Therefore the philosophy of science, which is a subdiscipline of epistemology – and which Quine said was ‘philosophy enough’ – could not be part of science. Nevertheless, the reciprocal containment implicit in Quine’s naturalism remains a challenge to all philosophy.

The Universe In Itself

As philosophers, we aspire to enclose territory that encloses us. When I make ‘the universe’ the subject of my thoughts, I am a minute part of that of which I speak. The same applies to ‘matter’: I clamp inverted commas around a vast quantity of stuff of which I am a tiny portion. Thoughts about thoughts are themselves samples of what they are trying to understand. Discussions of language and of consciousness are trickles of the boundless stuff they discourse upon. As for epistemology, it’s like trying to construct not only the branch on which you are sitting but also the tree, the ground on which the tree stands, and the processes that gave rise to plant life. And to return to our starting point, subjective and objective time seem to be reciprocally contained; as is evident in the gathering up of the history of the universe in a moment of consciousness that is a (very) recent moment of that history. The idea ‘13.8 billion years ago’ has to live within a Now that thinks it; or thinks it does.

The enigma of reciprocal containment affects not only the philosophy, and the higher strata, of knowledge, but also ordinary factual knowledge. It is prefigured in vision, which is often described as the most ‘epistemic’ of the senses. To see is to enclose a world from a vantage point; and yet also to locate one’s self within that world. I rise above a visual field and yet am situated within it. The larger the view the smaller I am compared with it: I am dwarfed by what my overview views. If we could truly think some of our thoughts we would be appalled at our minuteness. My enclosing vision, and more broadly, my ordinary general knowledge, locates me in spaces, times, crowds, boundless realities, that enclose me. As the history known to me gets bigger, so the Now in which it is known gets smaller.

The general point is that when we are engaged in philosophising, we are part of that on which we are trying to obtain an overview, working our way from within to an outside from which we can see the totality of things. This predicament would be even worse if Quine’s assertion that “knowledge, mind, and meaning are part of the same world they have to do with” (Ontological Relativity and Other Essays, 1969, p.26) were true. It isn’t, because Quine’s idea ignores or collapses the distance between mind and discourse on the one hand and the world that is thought and spoken of on the other. That, however, is an argument for another day, another column. For the present, it is enough to see how it connects with Quine’s claim that knowledge etc. “are to be studied in the same empirical spirit that animates natural science” and “there is no place for a prior philosophy.” In fact, these claims would seem to leave no place for philosophy period.

To defend epistemology and other branches of philosophy from the encroachment of science, it is not enough to disagree with Quine’s naturalism. We still have to examine the legitimacy of philosophy’s aspiration to an outside view, given that we are contained by that of which we would speak – and think. The very fact that we can see this predicament, however, must give us hope. Numerous metaphors offer themselves: a Moebius strip, which is all outside and all inside; an Escher staircase, where the top step proves to be the bottom one; or a super-Ouroboros that swallows not only its own tail but its entire body. But metaphors are not enough.

Theme for another letter, perhaps.

Raymond Tallis’ latest book, Of Time and Lamentation: Reflections on Transience, is out now.

On Making and Keeping Appointments