I have recently been thinking about non-existent objects. And yet I have not been thinking about nothing. How can that be? you might ask. Alternatively, you may be inclined to walk away muttering something about philosophers and their non-existent problems. But hang on in there. The puzzle of non-existent objects is like many a philosophical question: even as you are dismissing it impatiently, it draws you back with a sense that what is at stake is more than a silly tease.

Non-existent objects come in various kinds. There are beings that once existed but exist no longer, such as William the Conqueror. There are entities that have never existed but might have done so – winged horses being a favourite example. And there are items that never will exist in any possible world, such as square circles.

Let’s start with no-longer-existent objects. William the Conqueror ceased to be a going concern in 1087. According to those who subscribe to the philosophical position that calls itself ‘presentism’, William is not part of reality because only what is in the present is real.

Presentists face many problems, but the most pressing is how they can justify distinguishing between true and false statements about the past. This is the so-called ‘grounding problem’. Truth supervenes on being, and if the past has no being, there can be no truth(s) about it. But of course, there are such truths. That William won the Battle of Hastings and was a Norman are true; and that he lost the Battle of Hastings and was a chipmunk are false. William must therefore still be real in some sense. In what respect does this no-longer-existent entity have sufficient substance to underwrite the truth values assigned to assertions about him? One answer seems pretty straightforward: William is with us in his consequences, his present effects, that have been transmitted through intervening centuries, and it is these that provide the indirect basis for separating truth from falsehood. 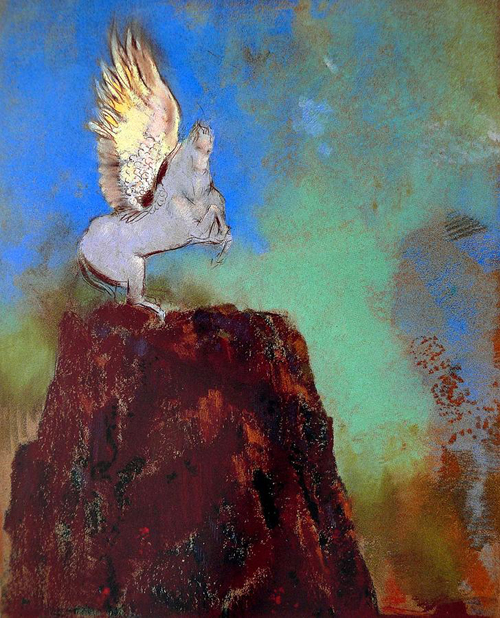 What about the second type of non-entities: possibilities that have never been realized?

To make things more difficult, and hence more interesting, let us think not of some general category such as ‘flying horses’, but of a particular instance, called by a proper name – Pegasus. What on earth can I be on about when I assert “Pegasus is a non-existent object”? Directing your attention in this way to something that doesn’t exist is like saying, “Look at that thing that isn’t there – or anywhere.” How can one target the reference of one’s words here? Doesn’t it seem that in order to deny the existence of an individual, one must in some sense presuppose its existence to give its denial a point of application? Worse still, how can I add, “And by the way, this non-existent object has two wings, not three”? Surely it must first exist before it can have specific characteristics. For an entity to be able to have specific qualities, it must surely be more than nothing.

So how should we think of never-existent objects, such as Pegasus? We must think of them existing in the form of unrealized possibilities; in particular, as combinations of the features of actual entities that have not been instantiated. Since there are animals that have hooves but no wings (horses), and animals that have wings but no hooves (birds), there is no evident logical reason why there should not be animals with wings and hooves. The weird combinations of features observed in the living world – insect-eating flowers, flying foxes – suggest that there are few limitations on the way organic features may be combined. Flying horses are entirely plausible, and can be intellectually synthesized in order first to be postulated, and then be denied to exist. There is nothing more remarkable about this than denying the reality of something more commonplace, such as a horse taller than twenty feet, or even a state of affairs such as an elephant in the next-door-neighbour’s garden. We are in the territory of possibility.

Pegasus is less, and more, substantial, than ordinary objects of false belief – the mundane possibilities that are not realized. Less, because the non-existent elephant in next door’s garden is at least ascribed a location in space (next door) and time (now). On the other hand, the flying horse is more substantial than the rumoured elephant, because it is more than a private illusion: it belongs to the community of minds. Pegasus acquires ‘quasi-ontological thickness’ through the network of beliefs, stories, and myths which refer to it. This confers authority on the characteristics ascribed to it – the winged horse is like what the winged horse is reported by so many, in words and pictures, to correspond to – and that makes it a more solid-seeming referent. What’s more, precisely because no-one will ever encounter Pegasus, the number of its wings is not open to empirical disproof.

This last point is connected with the status of fictional characters, such as Sherlock Holmes – a favourite of the philosophers of non-existent objects. The truth about Holmes is confined to what his author said about him. We know that he smoked a pipe because Conan Doyle said he did. From what Conan Doyle wrote, we may infer other things about him without being told – for example, that he had money to buy tobacco, and that he had a respiratory tract to inhale smoke. Likewise, we may assume from his detective work that he had legs, and from his talking that he had a larynx.

On the other hand, while we know he must have been born at a particular time, there is no point arguing about his date of birth unless Conan Doyle had told us it, directly or indirectly. There is no fact of the matter if there is no fictional statement of the matter. And we cannot fill in any gaps in our knowledge of Holmes by inspecting the world outside the works of Conan Doyle. In short, as a non-existent object – a meeting point of general possibilities conveyed through words – he can live on the page and in our imagination even though he lacks features that no real person could do without, such as a precise birth-date. Contrast this with your columnist. Unlike Holmes, I have (infinitely) many properties, and they do not require to be specified to be the case. Even if nobody knows or states the exact moment of my birth, there is a fact of the matter: it does not require to be known or reported in order for me to have a definite date of birth.

There is still something a bit fishy about a non-existent object that manages to have a singular identity picked out by a proper name, rather than being specified by a mere combination of general terms like ‘winged horse’. Sherlock Holmes’ singularity and the unique reference of his proper name are borrowed from the assumed singularity of the world created by Conan Doyle. We accept that Sherlock Holmes does not exist outside of that world. But what about Pegasus, which does not have a clear authorship, or a world bounded by specific words? We seem to be back where we began: paradoxically referring to a non-existent singular – to something that does not occupy any location in space or time (as a real entity must) and is fashioned merely out of a combination of general terms that does not happen to have any instantiation.

In fact, Pegasus’ situation is not fundamentally different from that of Sherlock Holmes – it is simply that the fictional world in which the horse occupies a unique spot is created not by the fiat of a single individual, but crystallizes out of the myth-making conversations of a culture – ancient Greece. In that world, like Mr Holmes, Pegasus can have an (equally imaginary) biography. Also, like Mr Holmes, he can do without some characteristics that are indispensable for real horses – such as a definite quantity of manure, which in his case would be dropped on the gape-mouthed populace below his awe-inspiring flight path.

And so we come to our third category of non-existent objects: impossible items such as a square circle. The latter is a logical contradiction, having to be simultaneously both four lines that have zero curvature (a square) and one line that has a more-than-zero curvature (a circle). Because in any world nothing could correspond to it beyond the words of which it is composed, it is the least puzzling: we can see that the idea is entirely intra-linguistic. There is nothing more to a logical contradiction than the logically conflicting general concepts that are put side by side in composing it.

We have by-passed the most elementary non-existent objects, and yet they are the clue to the rest: the objects of false perceptions. These are generated by our trusting our normally trustworthy senses under circumstances in which our trust is misplaced. Shadows that look like the outlines of lurking figures become to us lurking figures when we are particularly suggestible. The shadows would not, however, have undergone upgrading to ‘objects out there’ were we not obliged under ordinary circumstance to infer substances from shadows, or more generally, to draw conclusions from incomplete information. Hallucinations, in short, are cognitive parasites.

This is also true in a different way of the three kinds of non-existent objects we have been discussing, except that our relations to them are mediated by words, not by our senses. These non-existent objects are the fake referents of combinations of general term words (‘square circle’, ‘flying horse’) or proper names (‘Sherlock Holmes’) that behave grammatically like other nouns, but lack referents. So what Pegasus and friends parasitize is not perception, but the normal, effective, referential functions of language. Words are primarily used to mean things that exist independently of words. And since items such as Pegasus are generated by words, rather than by mis-perceptions, they are shared by those who understand those words: their putative existence is underpinned by the authority of the collective. Thus, unlike hallucinations, Pegasus et al do not vanish in the blink of an eye. They enjoy their non-existent existence for as long as they are referred to, thought about, or discussed. Their identity and distinguishing features are in the keeping of language which proposes that they are and specifies what they are. When all voices fall silent, it will be the knacker’s yard for Pegasus. But it’s important not to be misled by talk of parasitism to see non-existent objects as entirely the product of cognitive pathology. If it were not possible to reach out with words that have no external objects to dock on to, we could not entertain, and more importantly, share possibilities beyond that which we experience. So we have to deal with objects that may be non-existent in order to seek out, or imagine, real ones. Possibly existing (and therefore possibly non-existing) objects are central to the very function of language.

I have hardly begun exploring this (to me, and I hope to you) fascinating topic. I have said nothing, for instance, about abstract objects. But I will stop now before my readership joins the ranks of non-existent objects.

Raymond Tallis’ Of Time and Lamentation: Reflections on Transience is out now. His Logos: The Mystery of How We Make Sense of the World will be out soon.