Alistair MacFarlane on how a poet’s daughter invented the concept of software.

In 1842, more than a century before the start of the information age, in a brilliant flash of penetrating insight, Ada Lovelace had a glimpse of the future. She saw that with suitable modifications, Charles Babbage’s proposed Analytical Engine would be capable of much more than its intended purpose of simple mathematical calculation. Lovelace realised that such a device could be set to execute any logically coherent sequence of instructions, and in this she became the world’s first computer programmer: together with Babbage, she invented what we now call software. When she had her marvellous insight she was in the twenty-seventh year of her short life, and had less than ten years left to live. 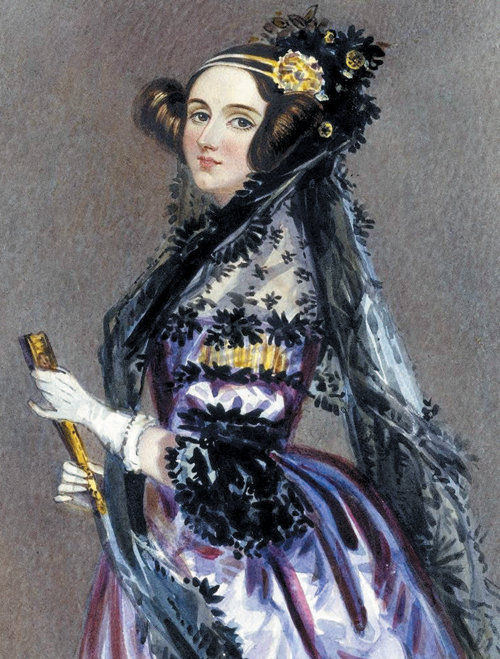 Augusta Ada Byron, who became the first Countess of Lovelace and is usually known as Ada Lovelace, was born on 10 December 1815 in Piccadilly, London. She was the only legitimate child of the Romantic poet Lord George Byron, being the daughter of his brief marriage to Anne Isabella (Annabella) Millibanke, 11th Baroness Wentworth. Annabella and George separated a month after Ada was born, and four months later Byron left England, never to return. He died of fever in 1824 at Missolonghi, while aiding the Greeks in their struggle for independence from the Ottoman Empire, and Ada became the daughter of a legend. She never met her father, and was brought up by her mother, now Lady Byron, who had gained sole custody, having had Ada declared a Ward in April 1817.

Lady Byron was herself interested in mathematics, and had been dubbed ‘The Princess of Parallelograms’ by her poet husband. She was a forceful and domineering parent, and was determined to bring up Ada to be as different from her father as she could manage to make her. Although she spent much time organising a succession of tutors to educate her daughter, in the aristocratic fashion of the day, she spent little time with the child herself. This caused the absent father – who was supremely indifferent to his own parental responsibilities – to write to complain about this neglect. Luckily the child proved more than able to cope, developing a passion for mathematics, and soon outstripping her tutors on all fronts.

Although Annabella neglected her child in some ways, she compensated in others, and ensured that Ada ‘came out’ into the rich mileau of early Victorian high society, which included meeting most of the leading intellectuals of the day. This led to Ada being tutored by Augustus de Morgan, a leading mathematician of the time. De Morgan soon confirmed Ada’s outstanding mathematical ability, and, importantly, communicated his admiration to his scientific friends. As a result, long before women were eligible to study for degrees, Ada came to more than hold her own with the leading contemporary scientists. She had become a strong-minded and confident young woman, battle-hardened by incessant struggles of will with her overbearing mother.

On 8th July 1835, Ada married William King, 8th Baron King – a weak-willed man who proved no match for his formidable wife. They had two sons and one daughter: Byron King-Noel, Ralph King-Millibanke, and Anne Blunt. Ada had married into great wealth, acquiring a large estate in Ockham Park, Surrey, a summer retreat in Somerset, an estate beside Loch Torridon in Scotland, and a large house in London. When King was made an Earl in 1838, Ada became Countess of Lovelace. As a result of all this, Ada Lovelace emerged with the means, knowledge, and ability to pursue her own interests with little constraint from financial concerns or conventional obligations.

In 1833, through their mutual friend Mary Somerville, she was introduced to Charles Babbage. Soon afterwards she visited his workshop to see his first mechanical computer, the Difference Engine, and her life changed dramatically.

Charles Babbage (1791-1871), a mathematician, philosopher and inventor, became a lifelong friend of Ada. He was Lucasian Professor of Mathematics in Cambridge [the post has also been occupied by Isaac Newton and Stephen Hawking], and he helped to found both the Astronomical Society (1820) and the Statistical Society (1834). Although a man of wide interests, he seems to have had little feeling for poetry. After reading Tennyson’s The Vision of Sin, which includes the lines, “Every moment dies a man / Every moment one is born,” he wrote to the poet, urging him, on the grounds that the population was increasing, to replace ‘one’ by ‘one and one-sixteenth’. Since Ada was so badly treated by her father, perhaps she did not discuss poetry with Babbage.

Babbage described how he came to his idea of a mechanical calculator: “I was sitting in the rooms of the Analytical Society in Cambridge with a book of logarithms open before me. Another member, coming into the room and seeing me half asleep, called out ‘Well Babbage, what are you dreaming about?’ to which I replied ‘I am thinking that these tables might be calculated by machinery’.” (Tables of logarithms and the like were at that time produced by ‘human calculators’, and were notoriously full of errors.) Although he was anticipated in the idea of an automatic calculating machine by both Pascal and Leibniz, Babbage’s proposals represented a huge step forward, and eventually came to display all the essentials of a modern computer. Babbage himself saw his machines purely in terms of mathematical calculation. It was Lovelace who grasped the wider implications.

None of Babbage’s calculating devices were completed in his lifetime (although working versions have since been built), but his efforts to construct them aroused widespread interest. Following a seminar which Babbage gave at the University of Turin in 1842 describing his second and more advanced proposal for a computing machine, his Analytical Engine, an Italian mathematician, Louis Menebrea, wrote the ideas up in a memoir, in French. Babbage asked his friend Lovelace to translate it. She did so in a concentrated period of nine months of feverish work, and, crucially, added a comprehensive set of notes to her translation, much longer than the memoir itself. It was these notes that have made her famous. In them, whilst describing the revolutionary implications of Babbage’s ideas, Lovelace wrote out the first computer programme – to sum a Fibonacci series – and she made the sensational suggestion that such a device should be able to compose music if a suitable set of rules could be devised. She thus anticipated the development of both modern computing and artificial intelligence by more than a hundred years.

It is hard to exaggerate or properly appreciate her pres-cience. Leonardo da Vinci had anticipated the development of flying machines by several centuries, but he had the advantage of having seen birds flying. What puts Ada Lovelace’s prescience in an altogether higher class, is that she had grasped how to make physical instantiations of wholly abstract concepts. In any computer it is the software which gives the hardware the ability to perform its wonders, and in 1842 this was a totally new and very strange idea. (Indeed, for many people, it still is.) However, one suspects that if Lovelace could have been shown a tablet or a smartphone, she would have immediately grasped the nature of the magic which makes them work, whereas it is reasonable to assume that Leonardo would have had a big problem.

Ada Lovelace overcame the obstacles she found in her path as a woman by using her aristocratic connections, her acquired wealth, and a compliant husband, to create a springboard which propelled her into the company of Britain’s scientific elite. She scorned the social conventions of a society which had raised hypocrisy to a high art. Unavoidably notorious as part of the Byronic legend, she increased this notoriety by embarking on a series of ill-concealed affairs, and so provoked scandal. This recklessness extended to a passion for gambling on horse racing, forcing her to pawn some of her jewels, and leaving debts of £2,000 at her death. Throughout her short life, Lovelace was plagued by a succession of illnesses, bravely disregarded. Sadly, she eventually succumbed to uterine cancer. Although wracked by pain, she remained mentally alert and continued to discuss her ideas with Babbage and other scientific friends and admirers until her death. Ada Lovelace died on November 27th 1852 in Marylebone, London. At her request, she was buried next to her father’s grave at the Church of St Mary Magdalene, Hucknall, Nottingham.

Ada Lovelace’s abiding legacy is that, despite all the obstacles in her path, she demonstrated beyond any possibility of doubt that women could attain the highest levels of scientific understanding and achievement. When Babbage showed her his first mechanical computer, it was incomplete, weighed over a ton, and was not yet working, yet Lovelace grasped its true significance. This sudden understanding of the immense possibilities opened up by programmable computers may never be equalled for prophetic insight. Some day – hopefully soon – with the ever-increasing opportunities now open to aspiring women scientists and philosophers, another such meteor of great insight will flash across the sky.

The Parable of the Ultimate Computer

The Limits of Computation