Joe Smith affirms a criticism of a popular view that sees Nietzsche as a right-on revolutionary.

Searching for ‘Nietzsche’ on YouTube will summon up a slick, insightful clip that has been viewed more than three million times. That’s impressive for a nineteenth century philosopher: Mill is lucky to reach six figures. As well as demonstrating his popularity, the clip tells you how Friedrich Nietzsche (1844-1900) is perceived, closing with praise for “our endearing, fascinating, often lovable” guide.

This is precisely the sort of fawning, soft-pedalling whitewash that Ronald Beiner wants to torpedo. The central message of Dangerous Minds is that there is no reading of Nietzsche that can make him morally acceptable to the political centre or left. Any interpretation that portrays him so is wishful, immature, and dangerous. 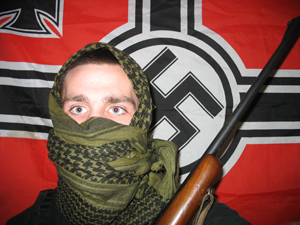 I agree with Beiner, and I also think that this is the most urgent discussion we could have about Nietzsche. We live at a time when the far right, sometimes inspired by Nietzsche, is resurgent; where he is revered by influential commentators such as Jordan Peterson; and where populist authoritarian leaders such as Putin, Erdogan, Orban and Duterte have in a Nietzschean manner downplayed the importance of rules and truth in favour of heroic visions of strength and destiny. As for Trump, his post-truth, ‘alternative fact’ reality is such a spooky echo of Nietzsche’s idea that ‘there are no facts, only interpretations’ that it prompted headlines asking whether the German could be blamed for Trump’s rise or whether he merely predicted it. [A question asked by this magazine too, in Issue 122, Ed.]

Beiner cannot get over how Nietzsche, so explicit in his attacks on liberalism and egalitarianism, has become such an influential philosopher to the left. It is not as if Nietzsche tried to conceal his dismissive views about liberal morality or about the general populace. He shouts them from the rooftops. To set up the argument against leftish interpretations of Nietzsche, Beiner simply has to repeat some of Nietzsche’s most repugnant expressions: here is Nietzsche advocating slavery; there an incitement to genocide; and everywhere the contemptuous repudiation of equal human dignity.

Some Nietzsche scholars excuse these extreme outbursts by reading them as metaphorical, rhetorical, or comical, rather than literal, action-guiding imperatives. Although Nietzsche does often leave himself open to interpretation, I can’t see a shred of evidence that Nietzsche was anything but deadly serious about these issues.

There are two key parts of Nietzsche’s philosophy that are unambiguous: he finds egalitarianism disgustingly decadent, and he wants humanity to grow out of the idea of universal morality. Each individual must decide their own moral code. The concepts of good and evil are to be scrapped.

Beiner reminds liberals that a commitment to human equality in some dimension – concerning rights, freedoms, or consideration as moral beings – is the defining principle of any post-Enlightenment morality. It is non-negotiable. But any kind of egalitarianism, and so any social codes based on equality, are simply anathema to Nietzsche. Regardless of your reading of Nietzsche’s most shocking statements, his explicitly amoral philosophy simply cannot underpin any kind of centrist or left-wing politics.

Of course, the far right are also confused if they want to rest their ideologies on Nietzsche’s shoulders. Nationalism draws his ire as much anything else; he found anti-Semitism ridiculous; and he recommends continually seeking new, shifting perspectives to understand the world. Most fundamentally, Nietzsche is clear in his firm rejection of any kind of herd mentality, left, right, or center.

Beiner wants to accomplish three further things with Dangerous Minds. First, he offers the idea of boundaries, or, more evocatively, horizons, as a key to unlocking Nietzsche’s critique of modernity. Second, he wants to argue that – contrary to what some leading academics would have you believe – it is false to say that Nietzsche had no political philosophy. Finally, he says that all of the foregoing – the destruction of morality, the primacy of political philosophy, and the centrality of horizons – apply also to Martin Heidegger (1889-1976).

Nietzsche’s attacks on liberal democracy still draw blood. Modern societies are in spiritual crisis, he says, because of their deification of rationality and equality. According to Beiner’s reading of him, Nietzsche finds this disastrous because it leads to the destruction of a culture’s horizons, which its people need in order to live authentically.

Cultural horizons are fixed frontiers of thought and imagination, such that the people defined by them know exactly who they are and what their purpose or aim in life is. In this connection Nietzsche extols the benefits of long obedience to a particular rubric, which he says leads to the flowering of such things “for whose sake it is worthwhile to live on earth; for example, virtue, art, music, dance, reason, spirituality – something transfiguring, subtle, mad, and divine” (Beyond Good and Evil, V:188, 1886). Pre-Socratic Greece had such boundaries, as did other pagan cultures. Christianity, too, has boundaries to be respected. But Nietzsche hates Christianity. Beiner’s slightly tortured explanation for this is that Christianity, although it imposes horizons, does not allow authentic self-creation because its doctrine of salvation negates the absolute tragedy of life, that everything ends in death and that in this way all our efforts are ultimately doomed. For Nietzsche a tragic culture is infused with the ‘pessimism of strength’ needed to face the void. Because that requires courage, it permits nobility. Christianity, on the other hand, promotes what he calls a ‘slave morality’.

Even more problematic for Western society, however, is that by ‘killing God’ – by losing our historic faith – we have wiped away our own cultural horizons, as Nietzsche poetically narrates in his most famous aphorism, ‘The Madman’ (The Gay Science, 1882). Without our horizons we are loosed into a vacuum which sucks all joy and meaning from life. This, says Beiner, is the root of Nietzsche’s special disgust with Christianity: it is the bridge from noble antiquity to fallen modernity.

Beiner’s suggestion that horizons explain Nietzsche’s distaste for modern societies feels right, although some of its traction may be due to its familiarity from ‘The Madman’. This explanation does, however, make mysterious the position of Nietzsche’s Übermensch (‘superman’) in the kind of individualist world he craves. Beiner claims, “Nietzsche wanted creativity and open horizons for the heroic philosopher and wanted brutally closed and confined horizons for everyone else” (p.36). But how would horizons be open to the Superman, if Nietzsche gets his wish and returns to the tragic and tightly-bound horizons of pre-Christian culture? To put it another way, why does Nietzsche mourn the wiping away of horizons that Christianity and then the Enlightenment brought with them, if his supermen are going to set their own horizons anyway?

The Same For Heidegger, Only More So

The notion that Nietzsche had no political philosophy is defended by prominent Nietzsche scholar Brian Leiter in the Stanford Encyclopedia of Philosophy. There he argues that although Nietzsche claims he is an important political thinker, and though he has much to say about how modern democracies are wrong, his positive political philosophy lacks detail. What positive prescriptions there are lying in the wreckage of Nietzsche’s criticism in fact apply to the individual rather than to the state, and concern how great people can realise their creativity.

Beiner calls Leiter’s view absurd. Just because a political philosophy is negative doesn’t make it any less political. That is surely correct. In fact, Leiter makes essentially the same argument in discussing Nietzsche’s moral philosophy. He allows that it is primarily negative, a critique of herd morality – but he still infers a positive ethics from it by assuming the positive ethics to be the opposite of what Nietzsche derides.

Dangerous Minds is ostensibly equal parts Nietzsche and Heidegger; but Heidegger is largely treated as a kind of fall guy for Nietzsche. Beiner points out that Heidegger’s analysis of modern societies is inspired by, and very similar to, Nietzsche’s. Horizons play a parallel role. Similar too is the fact that Heidegger lacked detail in his positive political philosophy. But, says Beiner, as with Nietzsche, we cannot therefore say his philosophy was not political.

That’s hard to dispute. From his writings and his actions it seems clear that Heidegger was a Nazi for at least some of his life. To suggest he lacked a political philosophy is therefore perverse. And it should go without saying that in this dimension at least Heidegger is morally unacceptable to most of the political left.

It is quite an effective strategy for Beiner to wheel out Heidegger in order to illuminate his theses about Nietzsche. When their critiques of modernity are laid side by side and the similarities explored, condemnation of Heidegger but not Nietzsche seems inconsistent. But it’s a strategy that’s also oddly anticlimactic, because our assent to his conclusions about Heidegger come so easily.

The book concludes with a warning about liberal complacency. Liberals may feel safe invoking Nietzsche perhaps because they think the presumption of equality is so well established that Nietzsche’s lone wild voice could never root it out. The belief that liberal values are universally accepted is evident in the twentieth century ‘proceduralism’ especially of John Rawls. “Privileging proceduralist morality,” Beiner claims, “is a way of saying that at bottom we’re all liberals – which would be fine if it were actually true.” In fact the liberal project is far from accomplished, as the resurgence of fascism and the global rise of authoritarian, nationalist leaders tells us. Beiner does not expand here on how his analysis relates to the contemporary political scene (although he did do so in a subsequent article on the History News Network). This is something of a missed opportunity. His points, however, stand. As perceptive as their criticisms of modernity were, they regarded large swathes of humanity – possibly people like you – as worthy of contempt, and they appear to have had no qualms about their possible enslavement or annihilation. Nietzsche and Heidegger were evil men.

Joe Smith is a journalist and PhD candidate at Exeter University. He has a background in psychology and wants to understand the implications of recent cognitive science for philosophy.

The Birth of Tragedy by Friedrich Nietzsche